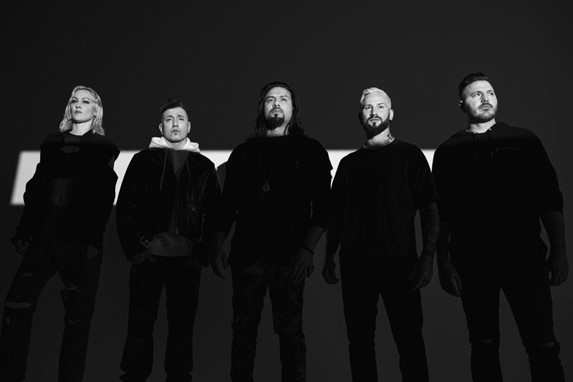 The concept and instrumentals for ‘Dead Reckoning’ were brought to the table by bassist Joey “Chicago” Walser and co-written with singer Leigh Kakaty. The producer of Skeletons, Drew Fulk (WZRD BLD), heard the demo and immediately suggested that Ryan Kirby would be the perfect fit for a vocal collaboration. In describing the song, the band said, “‘Dead Reckoning’ is about a clear and unwavering decision a person makes within themselves.”

The 11-tracks feature the band’s already released singles: ‘Eye of the Storm’ landing at the #5 Most Played Song in 2022 on Billboard’s Mainstream Rock Chart, and most recent single ‘Paranoid (Crash & Burn).’ The album includes guest features by Ryan Kirby from Fit for a King on ‘Dead Reckoning’ and Blake Allison from Devour the Day on ‘Wrong Direction.’

Discussing the album, frontman Leigh Kakaty said, “This is about us as a band stripping everything down to the bones. It’s more up-tempo, it’s got bigger riffs, and we’re trying to capture the energy of our live show.

“But it’s also a positive message, I know it’s a morbid visual, but behind every skeleton, there’s a story and something worth talking about. Overall, it’s about looking at something in a positive way. And I’m excited for everyone to hear that.”

The first single from the album, ‘Eye of the Storm,’ is a pummelling, chaotic maelstrom with an uplifting message at its centre (and a killer chorus). As for the song’s lyrical plea, Kakaty explains: “It doesn’t matter who you are or where you come from, at some point we all face a situation beyond our control. At times, it feels hopeless, but it’s not. There is a path through the chaos and a way out of the confusion. You are stronger and closer than you think you are. The storm will pass. Don’t let it bury you.”

Their most recent single, ‘Paranoid (Crash & Burn),’ oscillates from something more melodic and rhythmic to pure aggression, that ‘get out of my head’ scream is certainly going to resonate. “It’s about the voices in our head — we all have ’em, but do we act on them?” says Kakaty. “It’s a cautionary tale, about processing those voices in a positive way.”

Skeletons sees the band once again working with producer Drew Fulk (Disturbed, Papa Roach, Motionless in White), a friend and collaborator on a few previous albums that generated hits. “With Versatile we had a bunch of producers, but for this album, we just wanted to work with one person and get back to our roots,” says Kakaty. “There’s an energy he and I have, and he’s been great at helping us build these songs and work around some collective themes.”

Pop Evil have announced their rescheduled UK/EU headline tour. Catch them on the following dates with Call Me Amour and Zillion in support.

Previous article
A HEAVY HURRICANE
Next article
THIS IS IST