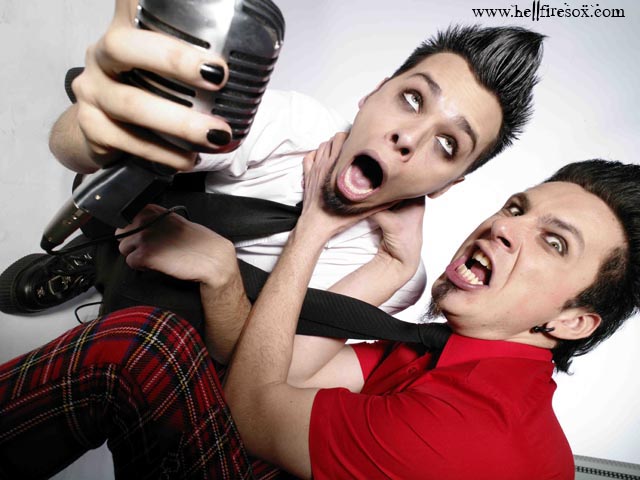 The song for the video is taken from latest band’s EP ”No One Will Pray For Us”, that came out last year and was followed by a Euro tour. Hellfire Sox are a beloved small club act not only in Germany, but now in Czech Republic as well.
In over a decade Hellfire Sox has released two albums and four EP’s, gigged in Ukraine, Russia, Hungary, Germany, Slovakia and Czech. Bands guitarist Alex states that he never wanted to be in “another punk rock band”. “We came out with a mix of The Offspring, Misfits and Nekromantix. This is what we call Hellfire Sox today,” he said. “We are recording music and shooting videos by ourselves and we’re so excited to hear what our fans think of our latest works”.
So far, the response has been positive. Now the band is rehearsing for upcoming shows and making new material. There are also plans for a couple of new records, videos and going on tour later this year.
Hellfire Sox are:
Den: Vocals, Guitar Alex: Guitar, Back Vocals Jim: Bass Pasha: Drums
Latest EP currently available only on a CD.
Band’s site: www.hellfiresox.com
Facebook: https://www.facebook.com/HellfireSox
YouTube: https://www.youtube.com/hellfiresox
Instagram: https://instagram.com/hellfiresox
Soundcloud: https://soundcloud.com/hellfiresox