Whether they dance in the sand in Warrington, who knows, but there’s a new single out

As much as imagination goes a long way in finding a unique sound, so does rich friendships within a band, that organic ease between members allowing a freedom of adventure that breeds ideas and invention.

There is a potent mix of both within the songwriting and music of English pop rock quintet Conquer Rio; imagination fuelled creativity aligning with the tight fit of hungry tenacity and passion which can only come from musicians connected firstly by friendship.

Hailing from Warrington, Cheshire, the ‘seeds’ of Conquer Rio can be traced back to a pair of children meeting in nursery for the first time. A big leap of years later and Tom Jordan and Lewis Melia were again side by side as Conquer Rio emerged in 2011 to start a journey which has already reaped thick rewards for band and fans.

Casting a sound loaded with infectiousness but unafraid to embrace deepest emotions, lyrically and musically, Conquer Rio has earned a strong reputation for their invigorating live presence and the anthemic quality to their sound which is just as potent igniting small intimate venues as it is larger stadium like surroundings. 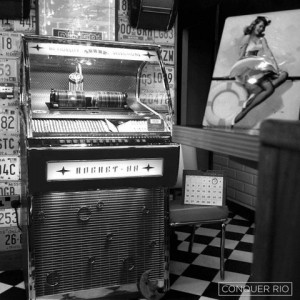 Theirs is a powerful live show earning a potent reputation through increasingly acclaimed gigs and events since the band’s early days, a résumé which includes playing the likes of the Etihad Stadium Magic Weekend twice (2012/13) and the Old Trafford Super League Grand Final also in 2013, as well as being the main support for Scouting for Girls at the Warrington Music Festival the following year and headlining both Islington Academy and Deaf Institute in 2014 and 2015 respectively.

Drawing on inspirations ranging from Biffy Clyro and Twin Atlantic to The Killers, Foo Fighters, and The Beatles, but a perpetually gripping and fascinating proposal brewing and exploring its own character and identity, the Conquer Rio sound continues to grow and evolve, as proven by the band’s Gavin Monaghan produced, recently released self-titled EP.

With a line-up of Jake Bate, Dan Cobley, and Ben Roberts alongside Tom Jordan and Lewis Melia, Conquer Rio across four contagious tracks weave expressive melodies and invitingly emotive vocals into the thick lure of dramatic hooks and punchy rhythms; all aligning beneath the provocative air of a virulently catchy atmosphere.

The band has a creative prowess which ensures their songs leap out but simultaneously create the hug of a big friend to quickly welcome attention.

With a new infection loaded single now poised to break free, Conquer Rio is becoming one of the UK’s big rock ‘n’ pop excitements with the coming months looking to be their most thrilling yet.

Tracks on the ep:

Be My Lady
Morning After
Talk All Night
Jukebox