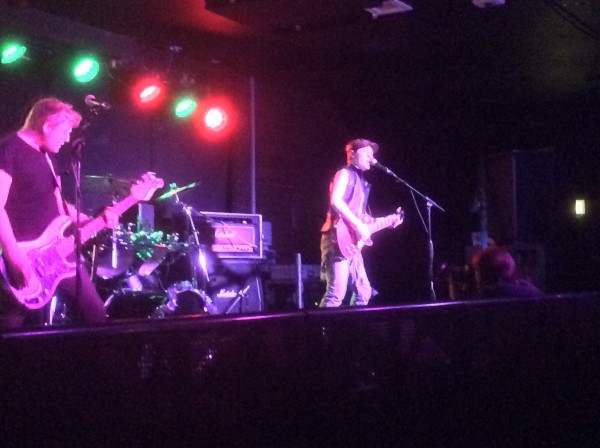 Theia – and superb support cast – have their Christmas Party. And everyone except MVM brings their daft jumpers along for the ride.

Local legends My Great Affliction are back! As always, MGA are rock n roll the way it should be. Three of them, bashing the crap out of their instruments and making a very pleasant Orange-Goblin-crossed-with-hard-rock type noise while they do. So good are tracks like “Give In To Me” that we’ll forgive Drummer Craig’s Christmas jumper on the grounds that, well, it’s that time of year. Perhaps best of all is “Mountain” which grooves along superbly. After a delay when singer Ste’s guitar breaks before “Santa Claus Is Coming To Town,” but with the instrument restored they turn it into decent knockabout fun, which is a fitting metaphor for their whole set. They’ve undergone plenty of changes over the last couple of years, but MGA have the talent and the songs to still make a mark.

Cancel Tomorrow say their sound is somewhere between Bullet For My Valentine and Iron Maiden. If by that the Birmingham based five piece mean they are fine metal tinged rock then we’ll go with it. Second song “China Doll,” sees three of their number play guitar and adds a huge crunch to things, but the whole thing is elevated by singer Emma’s excellent voice – although she too loses bonus points for a godawful Christmas Jumper (you really don’t like Christmas do you? -Ed) “Stand Alone” is almost what Absolva would sound like with a female singer and develops into an entertaining gallop. Closing number “World’s Collide” has an epic feel as well as being their most heavy metal tune, and with the band promising that: “things are gonna get busy,” Cancel Tomorrow might have plenty to look forward to in 2015.

Christmas attire watch number three. Just to get it out there. This time drummer Mike Woodhouse is wearing something ridiculous. Anyway, that out of the way, it’s the first time MVM has come across Lynus. It takes about 45 seconds of opening number “In The End” to convince us it won’t be last. That is how long the track takes to kick in, and when it does, it does so like Alter Bridge with muscles. New song “Black Mirror,” meanwhile, has the type of weighty slam that can move mountains. A three piece tonight, as second guitarist Dan isn’t here, we learn that in his absence singer Justin let’s Mike twiddle his beard backstage, which is good to know. With that sorted they race through new single “The Unknown” which is superb. We also discover that Lynus have lost their setlist, but luckily they remember to do “Clones” which comes complete with a bass-heavy rumble. “Shadow Chasing” has a chorus with massive intentions, while “Wasted” outdoes it for catchiness. The lyrics to “Mistletoe And Wine” are placed on a music stand, which should be enough to send grown men running to the hills – that is until Lynus play it like the Sex Pistols, so you almost want to say hats off to them for doing it. Almost…..Cliff aside, these boys are ace!

Band number four are setting up and there are the fourth and fifth dodgy jumpers on show. These belong to Theia bassist Paul and singer Kyle, both of these young men probably still believe in Santa anyway – and even if they don’t they’ve certainly had quite the year so we can forgive them being in celebratory mood. If you’d just played Hard Rock Hell, been featured on the New Rock Show on Planet Rock, and were playing your biggest ever headline gig you probably would want to wear one of Noel Edmonds’ finest too.

But, as we’ve said on numerous occasions since we first saw the band some four months ago now, they deserve every ounce of praise and every booking they get. A mighty fine band live, a mighty fine band on record, they are surely destined to fill places like this – and bigger – in the not too distant future.

When the trio arrive onstage the jumpers are gone. The boys are here to work. And by work we actually mean just rock like bastards. Opening with “Ride On” it is clear that there is nothing much else we can say about Theia that we haven’t already said. However, let’s just make it as crystal as possible: the band we are looking at here has the potential to go right to the top. They are quite obviously quite brilliant at what they do. “Some Days” is chockfull to the brim with enthusiasm and the even the cover of “Footloose” which follows somehow sounds right.

There is another cover a little later and The Darkness’ “I Believe In A Thing Called Love” gives them a chance to strut, while their own material seems to swagger just that little bit more each time we see them play. Not least of these songs is their single “We’re Alive” which carries with it tonight the air of a band who just feels that something is right. As always they end with their signature tune “Whoop De Fucking Do” which, although wrapped up in extremely cheery, bluesy hard rock, is actually a pretty damning condemnation of celebrity culture. It’s just that it sounds so good no one gives a toss, everyone’s too busy enjoying themselves – band included as they end up in the audience before the end.

With it being Christmas and all that, there’s an encore, for which Kyle dons a Rudolf mask, the other two Santa hats and well, play that sodding Slade song for which they are joined by assorted Lynus chaps – but then it is the Slade Rooms we are in….

With that Theia are done. But the hardest working band in Christendom aren’t putting their feet up. They have more gigs next week. If there’s any justice in this Simon Cowell infested world, that hard will pay off. According to Wikipedia Theia was a planet that – according to legend – could have destroyed the Earth when colliding with it millions and millions of years. That’s all a bit Brian Cox for us at MVM. We don’t know quantum physics, but we think we know rock n roll. So here’s our prediction: that Earth that was nearly obliterated? It’s all going to know about a three piece band from Burton. It’s a matter of time.