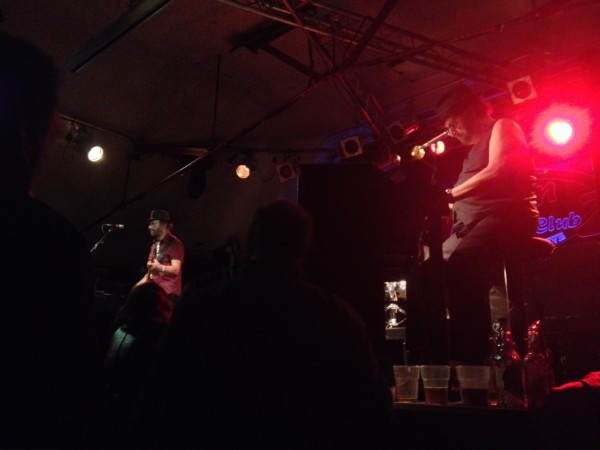 MVM has it’s annual knees-up in the company of legends. Cor blimey!

When the list of great British songwriters is compiled eventually, we’ll bet right now that the names Chas and Dave are conspicuous by their absence.

That’s the problem with elitist hogwash.

The alternate view would be that for forty years or more Chas Hodges and Dave Peacock have been writing songs quite unlike anyone else ever does, which is why there’s always so many people to watch them when they do this stuff.

They’ve had a good year. Playing alongside Maiden and Dream Theater at Sonisphere (where they apparently engendered crowdsurfers) while recently they’ve traipsed around arenas with Status Quo. This though, is their natural habitat a club full of their fans. It’s also the set that they’ve been knocking out for years.

So, they come out and play what is apparently the set they used to do in the pubs of the East End in the 70s. Most of these are covers, “Midnight Special” by Lonnie Donegan is a highlight. There is also a stab at some New Orleans R and B, but in these hands it all sounds like the theme to Minder, which only means the world is at is should be.

Towards the start of this section the trio (completed by Chas’ son Nick on drums) play a song by a character called Harry Champion, and this sows the seeds for the Greatest Hits set after the break. “Pay Up And Look Big” and “Edmonton Green,” two of their earliest originals, show this in embryonic form – the latter in particular with it’s tale of a pub that was “a rough old gaff” and “a bloke that sells hot taters,” phrases that will mean nothing to anyone that’s not British.

The set ends, as ever, with the song that gave them their first top twenty hit. In 1979, Chas And Dave unleashed on the world a song called “Gertcha” based around a word that Chas’ dad used to say when he was annoyed, and they hit on the formula that made them famous in the decade that followed. Namely they wrote songs that were funny, yes, but they also had a universal appeal.

The second set is full of ’em. And you can tell they mean business too – Chas has taken his shirt off (the waistcoat and hat stay on though).

They are all here from “London Girls” and “Wallop” to “Snooker Loopy.” And here’s the thing: what we are dealing with here, yes, it’s knockabout fun, yes it’s a cockney knees-up, but this so much more than that. This is nothing short of a celebration of British working class life, whether or not the po-faced critics will have it or not. There’s a moment when they play “Margate,” complete with it’s “you can keep your Costa Brava, I’m telling you mate I’d rather” line when MVM finds itself wistfully thinking on Christmas 1987 when it was the theme tune to Only Fools And Horses Christmas Special and remembering family members that were then but who are no longer with us – we probably aren’t the only ones. See what we mean about great songwriting….?

“Poor Old Mr Woogie” is riotous, “What A Miserable Saturday Night” is a study on being poor, while “When Two Worlds Collide” which is from the album they released earlier this year, brings us right up to date.

Best of all, though “Diddle Umma Day” which possesses perhaps the most ridiculous chorus known to man. They follow this up with “Rabbit” which promptly turns several hundred West Midlands natives into Purley Kings And Queens.

“Ain’t No Pleasing You” and “The Sideboard Song” wrap things up, leaving the belief that Chas And Dave are still – after all these years – special. Christ, something approaching a mosh breaks out during the latter.

The undisputed kings of bar room boogie are still alive and well.