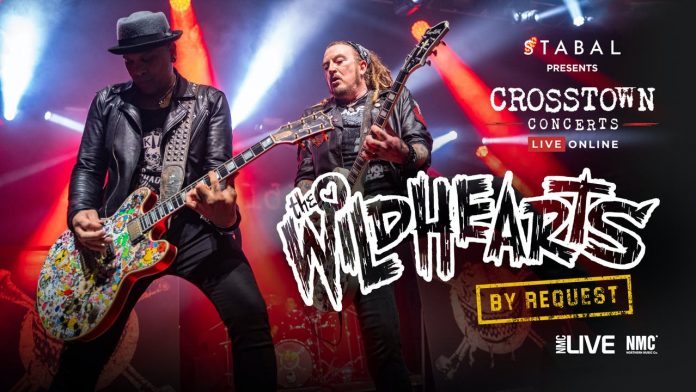 “Dislocated, I feel dislocated from your world….”

As ever, The Wildhearts find a way to speak for me, and its something of an irony that they choose to start their livestream event with this one, the fantastic opener from their most recent record “Renaissance Men”.

Because its now 13 months 3 days since I last saw a gig (Stiff Little Fingers at the Birmingham Academy as it happens) and although the world and his backing singer has been desperate to stay relevant by any means necessary (Toyah and Robert Fripp doing “Smells Like Teen Spirit” that I saw on social media the other night is enough to make any one give up on music) I just haven’t got on board.

Livestreaming. Is a massive shrug to me, as big a shrug, as it happens, as paying a tenner to watch my beloved football team kick a ball about disinterestedly in an empty ground.

But. Well it’s The Wildhearts turn. And, as I have written about a million times in the past, they are my favourite band. Such things get you special treatment, so here I am watching “By Request”.

Now, we spoke about irony and as Ginger (who treats this with seeming bewilderment) notes, “we asked the fans to pick the songs and they picked the same as we always play. Nice imagination, fans!”

Whilst they might come out on stage to little known b-side “The One Before The Lights Go Out”, the rest of the gig has a striking resemblance to the most recent sets they played and that’s the thing because for all that Ginger wryly observes, “here’s another one from ‘Earth Vs. The Wildhearts’  popularly known as the best of the Wildhearts” before “Everlone” as he understands we all grew up with these songs, we all have stories about these songs. And a little like the football analogy, we are tribal about the band. They are ours.

“Suckerpunch” (“ahhh this one I like to play”) follows and just for a bit, when he screams “oh you motherfucker” you forget that you are in your room, with your feet up, and lets be honest as wonderful as these songs are, without me shouting “whoah, woah” in “Vanilla Radio” then it will never be the same.

However, credit to them for making this so damn good. The sound, the lighting, the production values are all top notch.

“The Revolution Will Be Televised” is proceeded by a toast and a question of “right, who’s got the drugs?” When none are forthcoming the phrase: “times have changed” seems to be multi-layered, and “Red Light, Green Light” as always been one of their best, and its always a treat to hear it.

“Sick Of Drugs” is mighty as ever, “Caffeine Bomb” has me recalling all the times me and my brother have tried to do it (to torture the football thing a bit more, The Wildhearts aren’t just about the songs) and even though Ginger “hates” and publicly retires “Greetings From Shitsville” (“it can get itself to wherever Nita Nitro has gone”) then it still sounds ace to me.

As does the rest of it. “My Baby Is A Headfuck” is the song that started it for me, 26 years ago, the one that made me fall in love with the band, and “Diagnosis” – the one that came out of nowhere really on the last album to be one of their best ever songs – is worth Ginger’s rant at his guitar.

The last two feature huge Wildhearts fan and mate of the band, Frank Turner. He looks to be having the time of his life on Let ‘Em Go” and “I Wanna Go Where The People Go”. And that’s it. Well, sort of. If you have the deluxe version you get a song from the new as yet unreleased album “21st Century Love Songs” and let me tell you, “Splitter” is a work of genius on first two listens. Genuinely stunning.

And that – for the music  – really is it (there’s a shed load of bonus content that I’ll wade through over the next month) and as the credits roll, it says “we hope you enjoyed the show, see you at the next one.” Redundant cliché, perhaps, but hopefully me and another 2000 are there, because there’s nothing like them.

They didn’t even play my favourite song, and yes, I’ll admit I’d have liked some more obscure stuff (but then I was at a legendary gig at JB’s in Dudley once when they played a rehearsal of their support set with AC/DC and then came back to play about two hours of b-sides, so I’ll cope).

I can however, say with absolute certainty that this is the best livestream gig I’ll ever watch.