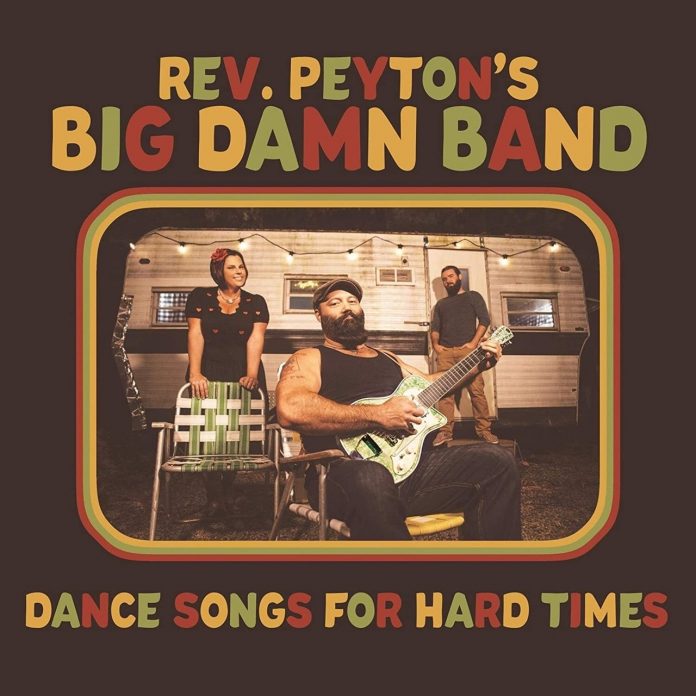 “Ask your mama, she’ll say the same thing, I got all the ways, I just ain’t got the means” – so sings Rev Peyton on the opening track here, “Ways And Means” and good grief, the album is aptly named.

So the bad Rev. and his Big Damn Band, have come up with just under 40 minutes of the filthiest blues, the most primal, lust filled stuff there is. And this has been a dreadful 12 months, and we all need it.

For “Dance Songs for Hard Times” they’ve drafted Vance Powell as producer and amongst the artists he’s worked with (Chris Stapleton, Jack White et al) the one that sticks out for me is Clutch. Because not only does “…Means” sound like a blues song from the pen of Neil Fallon (the patron saint of all bearded rock fans of a certain age) it has a similar crunch to their “Electric Worry”.

“Rattle Can” swaps vibe completely. This is like Elvis marched into the Sun Studios after a three day bender and let out all of his anger, and “Dirty Hustling” (on which Rev notes “I ain’t scared of nothin’ like he really means it) almost dares you to find fault with it.

“I’ll Pick You Up” does the US thing of using the car as a metaphor, but so dirty do his intentions sound that you almost pray the “damn thing” doesn’t start (to borrow its hook), and you could if you want, resist the charms of “Too Cool To Dance” – you could, but you’d be stupid to do so.

In fact, the key to the whole record is contained in it: “we might not get another chance” sings Rev, and that’s the point. Live for today, it says. Like its an order.

One thing that gets overlooked too often with the band, is the brilliance of the playing that the trio manage. The guitar is incredible, and Breezy Peyton is arguably the finest percussion player around, and never mind the drumming of Max Senteney. The balance of this is stunning.

“No Tellin’ When” lurks about in the swamps, about to do lord knows what, but “Sad Songs” might be the best thing here (competition is strong) but simply because of the way fire and brimstone, deep south recital way that Josh Peyton roars this, its special.

“Crime To Be Poor” adds some harmonica, and imagines a world where CCR were in the Hells Angels, but the pure blues slide guitar of “Till We Die” is oddly sweet. “Sweet” isn’t a word you can use to describe “Nothin’s Easy But You And Me”, but catchy is. They’ll be vaccinating for this next year, I’ll swear.

The last one “Come Down Angels” is a slice of front porch blues, not too dissimilar to Kelly Joe Phelps, in truth, except it whips up a storm. A veritable hurricane, preparing to blow everyone away.

“Dance Songs For Hard Times” could basically raise anyone from their slumber, and if the light at the end of the pandemic is visible, this best be your soundtrack. There’ll not be a record quite like this one in 2021, and there’s not been one better yet.