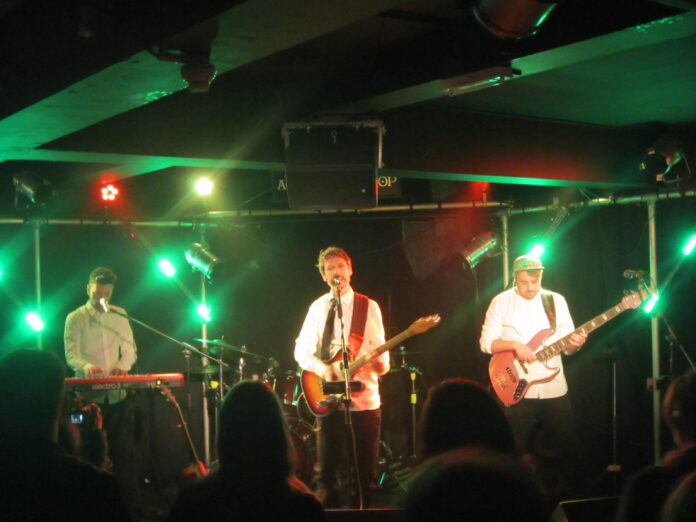 I`m very proud of my hometown, Birmingham but a Sunday night is a disaster. A fair few of the pubs don`t even bother to open. I was at a gig a few weeks ago and the band were over from Ireland and I counted ten in the audience and that included four who were in the support band! So, coming into a fairly full upstairs room was a really pleasant surprise this evening.

Billy Rowan is a Drum & Bass MC turned singer-songwriter and creatures music under the moniker The Undercover Hippy. He has been described by Tom Robinson (BBC6Music) as being “like the love-child of Steel Pulse, Kate Tempest and The Sleaford Mods”.

The Undercover Hippy arrives in Birmingham at the half way point of a twenty date trek of the country at a venue called The Actress and Bishop, i`m sure there must be a joke in there somewhere!! This place used to be called The Last Drop and has a brass plaque outside proclaiming it`s the site of the last public hanging in Birmingham. This has proven to be a publicity stunt but the last public hanging did indeed take place just around the corner in August 1806.

Tonight, we had a different kind of execution of some wonderfully compelling and danceable infectious reggae rhythms which began with `Poor Little England` a track off the band`s forthcoming fourth album of the same name.  We head back in time to the classic `Coming to the Gambia’ from the `Monkey Suit` album before the guys offer up a few new tracks. We have `Not my Place` along with `Hippy Dude` written about a sleazy guy who tries to impress disinterested females with his chakra (fnarr fnarr) at festivals and `Hey Boy` where Billy switches to an acoustic guitar.

The thought provoking ‘Borders’ is shared alongside the amusing `Mate Like That’  before ‘Truth & Fiction’ a number the singer wrote as Trump was looking to run for office in The United States. There`s another new tune with `Greed is the Cancer` which namechecks Bill Gates and Boris the buffoon before the new single `These Days’ gets a blast, it`s out next month so you have time to pre-order a copy.

The home stretch includes `Rise and Fall’ which is almost rapped at times and the superb earworm of `Boyfriend’ a number that sends the crowd into a frenzy. I`d encourage you to check out the video on line as it`s a cracker!!

`‘Fool Britannia’ a song about Britain’s nostalgia for the days of Empire, and how that has sent us into the hands of populist opportunists and right-wing zealots closes out this marvellous show.

The fellas return to the stage for a one song encore with ‘Last Chance to Dance` and it sends this fanatical crowd into meltdown before there`s an audience and band selfie and we`re all heading home with big grins on our faces and that warm glow that only comes from a show that feels really special.

Despite this being the band`s sixth gig on the trot and arriving on stage looking like a party of Mormon or Scientology preachers this was a wonderfully infectious and captivating  experience and I left with some lyrics ringing threw my head that did give me something to consider.

Tonight , this band managed to share a stunning festival vibe in a compact indoor setting. There are ten more dates for you to enjoy this amazing experience, please don`t miss out and regret this opportunity.