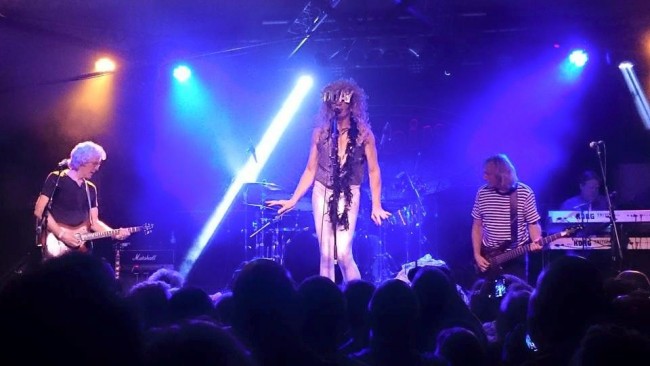 Garry finds that thirty years is worth the wait

I’ve been a fan of The Tubes for over thirty years now but it’s taken until August 2015 to actually see the band live….and what a show it was!!!!

A packed Bilston Robin welcomed Prairie, Roger, Rick & David onto the stage bang on 8.30pm for the instrumental ‘Get Overture’….you realised instantly that these guys were at the top of their game….we were in for one hell of a night!!!
The legend that is Fee Waybill sauntered onto stage resplendent in an overcoat and fedora as the band launched into Sinatra’s ‘This Town’ and Gene Pitney’s ‘A Town Without Pity’….both done in fine Tubes style…..these tracks were followed by ‘Power Tools’, ‘Rat Race’ and then  ‘Crime Medley’ which enabled Fee to leave the stage for the first of many costume and character changes of the evening.
Fee returned in a straight jacket and prison fatigues for the utterly superb ‘Mr Hate’….a real fans favourite….that was followed by ‘Amnesia’, ‘No Way Out’ and ‘Life Is Pain’ before Fee changed once again into an outfit that had the audience remembering that memorable line from Tarantino’s Pulp Fiction ‘Go wake up the Gimp’…..it was ‘Mondo Bondage’ time!!!!
The Quizmaster was the next character Fee became for the track ‘What Do You Want From Life’ with a nice plug for Bruce’s leisure suits of San Francisco….you just had to be there….a green rubber lizard mask was donned for the track ‘Sushi Girl’ before without doubt one of the greatest Rock Ballads of all time in ‘Don’t Want To Wait Anymore’ which rates for me alongside ‘Drive’ by The Cars & ‘I Want To Know What Love Is’ by Foreigner…..just a shame it didn’t shift as many units as those two songs.
We were treated to an excellent Prairie Prince drum solo before Fee returned as the legendary character Quay Lewd complete with two foot high heels to perform ‘Boy Crazy’ and the show stealing ‘White Punks On Dope’ which the crowd belted out with everything they had.
The band returned for the encore ‘She’s A Beauty’ which sounds as good now in 2015 as it did back in 1983…..the Beatles cover ‘Saw Her Standing There’ done in proper Tubes fashion was next closely followed by the brilliant ‘Talk To Ya Later’…..the band finished off the evening with Hendrix’s ‘3rd Stone From The Sun’ to an amazing ovation from a crowd who knew they had just witnessed something very special.
It was The Tubes 40th Anniversary Tour…..let’s hope that we see Fee, Prairie, Roger, Rick and David for their 41st, 42nd and beyond….they really are a joy to behold!!!!!