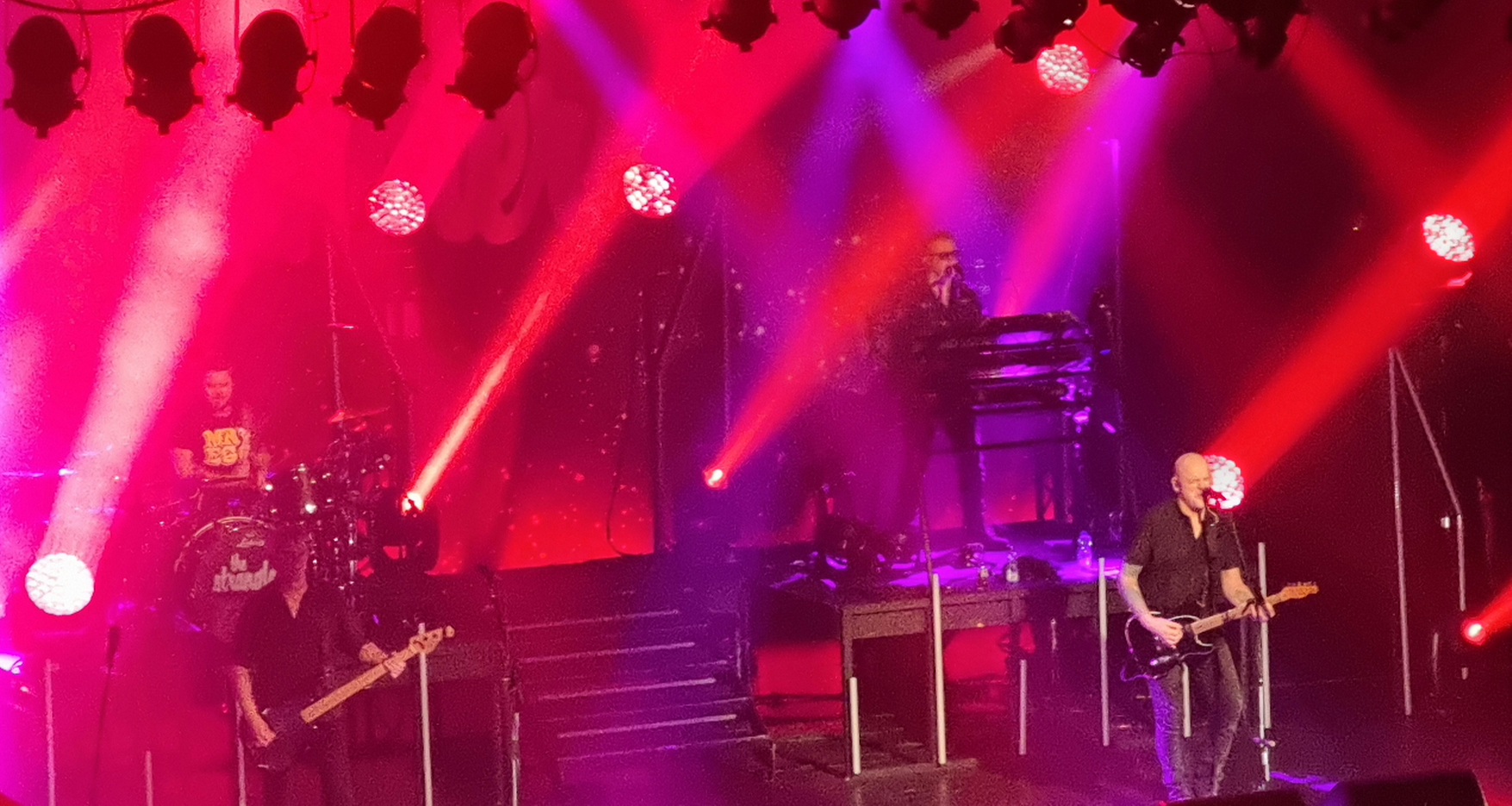 It’s a measure of the esteem that The Ruts are held in that just before Ruts D.C come on stage tonight, I am flicking through Twitter and see a debate occurring as to the best opening three songs on an album. One of the replies nominated the opening trio from “The Crack” – their debut from 1979. Two of these are played here, and they actually open with “Something I Said”, another of its songs, and its absolutely clear that the talent the band had is still there (and according to seasoned watchers of the trio, they are playing better than at any point since they reformed at the moment). Three pieces are, of course, always seemingly so well balanced, and Ruts are no exception and for 45 minutes here they set about proving why they were so highly regarded amongst their peers. “S.U.S” another from 1979 is more than just an exercise in nostalgia, it has an anger, still, but all the same John “Segs” Jennings and Dave Ruffy – the pair of originals left – seem to be having a fabulous time. Their enduring influence on music shines though on “Kill The Pain” (and its doubtful I’d have much of a record collection if music like that hadn’t influenced the 90s) and their reggae influence is clear on “Jah Wah”. “Staring At The Rude Boys” takes us back to a different era, and “Babylon’s Burning” – the other of those opening trio that was being discussed earlier – like all the best songs, hasn’t dated at all. After “Psychic Attack” (a rare track played from D.C’s “Music Must Destroy”) they are gone, but no matter, through Ruts D.C, the Ruts will always live on.

“You know,” says Jean-Jacques Burnel, as The Stranglers come back for their second encore, “we haven’t always been the best band in the world, here’s one we used to play in the pubs when we were coming up”. And with that they launch into “Go Buddy Go”, and pub rock never sounded better, I’d wager.

That alone (and the presence of a smattering more from “Rattus Norvegicus” – one of two records they released in 1977) is enough to make clear that The Stranglers are more than happy to give people the nostalgia trip they want, but this two hour set is way more than that.

For one thing they put out an album last year, “Dark Matters” was their first one for nine years, and not far off half of it is played in this well paced wander through a career. Then there’s the obvious. It’s been two years since the band played live and in that time they’ve lost a long standing member. Dave Greenfield’s keyboards were integral to the sound, and thus Toby Hounsham had some shoes to fill. He does it superbly, as Baz Warne points out as he introduces “Sometimes”, “I’ve never seen his testicles, but they must be big”. He’s not wrong, isn’t the boy Warne.

About 15 minutes before that, they’d begun with the instrumental “Waltzinblack” and “Toiler On The Sea” and its clear to see just how much this band means to its audience. It’s interesting, seeing as your humble scribe was 18 months old when “….Norvegicus” came out, that I can’t claim to have “been there”. There’s people all around me, though, who clearly were and they are moved by “Always The Sun” like you rarely see.

“Peaches” – another of those ’77 songs – is good fun and, like the others, has stood up amazingly well to the intervening decades,  as has “Golden Brown”. This is the one I bought, in the Co-op where my gran worked, about a year after it had come out (and looking back, what were my parents thinking letting me use my pocket money on it!?).

If ever you wanted to sum up the gig in a sentence, then the fact that “Last Men On The Moon”  is followed by “(Get A) Grip (On Yourself)” and neither sounds out of place is perhaps the best way, a past and a present is a superb thing to have.

“Duchess” and “Hanging Around” finish things in suitably raucous fashion, but then Warne and Burnel return with acoustics to change the vibe wonderfully. “If You See Dave….” Their tribute to Greenfield (“my colleague and friend for 45 years” says Burnel) is poignant and sets entirely the right tone.

Which brings us back to where we came in, as it were, and “….Go”, except obviously there’s one more to come and “No More Heroes” is deserving of its place in the pantheon of great 70s songs.

What had gone on before proved something else: there are heroes. Just ask the people who have loved – and lived – these songs for 40 odd years and it doesn’t matter whether they are on stage or off, the reaction is the same.