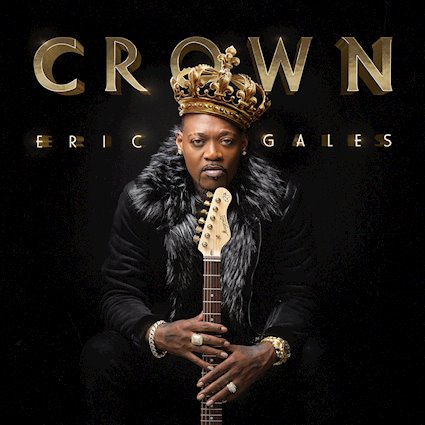 I’ve only seen Eric Gales play live once. During that show, almost five years back, he became the only person I’ve ever seen play live that broke down in tears on stage.

Whatever you think about displays of emotion such as that one, then one thing is, surely, clear: Gales is a chap for whom music matters.

This is where his back story comes in.  Now, to be truthful with you, I am usually very, very good at not caring about an artist’s personal life. They (and I think this is the right way to be) exist in their songs for me. With Gales, though, his personal story is so intertwined with his music that it is inescapable.

That, largely is because music has been his redemption. So a quick reprise: he was the guitar prodigy, along with Joe Bonamassa they were the kids to watch. JB went to the very top (and there’s more on him in a minute) Eric, went to rock bottom. Prison, addiction, and all kinds of other things.

His most recent records have all had this about them, but on “Crown” – written against the backdrop of the pandemic and the murder of George Floyd – the anger is raw. Indeed, Floyd was murdered the day before the sessions began for this.

So, when the record begins with the words: “My name is Eric Gales. Any questions?” it damn sure doesn’t sound like he’s in the mood for taking any.

The answers are in the sprawling 16 tracks that follow, anyway. “Death Of Me” is an opener that punches hard. A note to his younger self, it is a mighty beginning. One of the best things here, actually and it sets up the idea that this – in the main – is not a “fun” collection. And in that, I guess you could say it is reflecting its times.

He raps a little on that one, and soul and all kinds of other aspects are never too far away from this. Yes, it’s a blues record, but as the discussion on racism, “The Storm” proves, its not going to be a conventional one.

It occasionally touches brilliance, that needs to be said. The de facto title track “I Want My Crown” is a statement of intent, and the solo battle between Gales and co-Producer Joe Bonamassa (and there’s a cheeky dig at JB in the lyrics) is sensational.

If I haven’t discussed Eric Gales guitar playing much before that, then that’s for two reasons. First, it’s a given. Good lord, even someone who has never picked up a guitar like me, can spot the fella is a genius with a real gift – “Stand Up” is one of many that make that clear – but second, it feels like the playing is, in many ways, secondary to the message. Not for nothing does he sing “I just want respect, I don’t want a handout” on “….Up” and that maybe why the “engine room” of the album if you will, has a wonderful “Survivor” (“I’m still here, I am a survivor” it goes) and a thunderous “You Don’t Know The Blues” – on which Eric lists a load of things like prison, sleeping rough, redemption and all kinds of situations. All the things, then, that have gone into this record and which make him what he is.

After all this there’s “Too Close To The Fire”. An epic thing that surely will be the centrepoint of his live sets moving forward. An incredible song lays bare just how much Gales loves this music that gave him a second chance.

And even on this record, it provides the high-water mark. The last third is the light at the end of the tunnel, in a way. “Put That Back” is playful, “Take Me As I Am” is a vehicle for his wife LaDonna’s voice as she takes the lead, before the groovy “Let Me Start With This” changes vibe yet again.

“I Found Her” does likewise, adding an accordion to the intro on a real slow-burning love song, and “My Own Best Friend” is another in the file marked “truth”. This is the work of a man that has worked even harder on his recovery, and deserves praise for that.

It all ends on a real smile. “I Gotta Go” casts him as soul band leader as he introduces the band, “before we all gotta get outta here” and its beautifully done. He’s 100% doing this at every live gig he plays.

And the stage, really, is what he loves, and where he belongs. But on “Crown”, Gales, his band, Bonamassa and fellow co-Producer Josh Smith, have bottled just about everything that led him to this point.

His name is Eric Gales. Any questions?