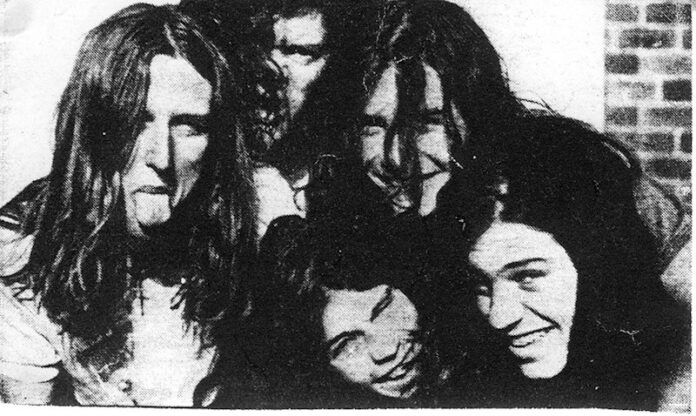 Some 30 years after they disbanded, Wollongong’s seminal pre-grunge rock band THE PROTON ENERGY PILLS are back and ready to fill in the long time between drinks.
In what is best described as an archival recording project rather than an official re-union, THE PROTONS are amazed to announce the release of two-killer new/old tracks, ‘Revolution’ & ‘Tombstone’. Both songs were originally written and performed by the band back in the day, and are two songs out of a bunch of songs the band never had the opportunity to record and release. They sit perfectly in the band’s noisy, long-haired, high-energy rock style.

‘Revolution‘ & ‘Tombstone‘ are out now on all digital platforms via Golden Robot Records, plus the official music video for ‘Revolution‘ is now available to watch on YouTube.

ABOUT THE PROTON ENERGY PILLS
The story of how THE PROTONS came back from the dead is eerily reminiscent of how young American blues fans in the 60’s went south in search of the blues players from the 30’s and 40’s. The Protons were re-born so to speak after some younger Sydney fans/musos went south to Wollongong in search of the band members. These younger fans had long passed live recordings of the Protons amongst each other and formed an idea to properly record the great songs the band never had the opportunity to put down before they disbanded.

The reborn line up of The PROTONS features original singer & guitarist (and main songwriters) Dave Curley and Stew Cunningham with a bunch of younger musicians from a new generation helping out – Brett Hottes on bass, Grant Lawrence on drums and Jonny Turcinskis on 2nd guitar. Both original members are keen to acknowledge it is the ‘not really’ version of the Proton Energy Pills. Original bassist Jay Curley sadly passed away in 2014 making a genuine re-union impossible.

The original line up of THE PROTONS released a couple of seminal 7″ singles and an EP circa 1990 on the Waterfront Records label and also toured as support to MUDHONEY and DINOSAUR JR on their pivotal first Australian tours. Earlier in 2021 a re-issued vinyl LP of THE PROTONS original studio recordings on the Music Farmers label made it to #15 in the ARIA charts.

2022 should also see a full album of previously unreleased songs along the lines of ‘Revolution‘ & ‘Tombstone‘ and possibly even some live appearances throughout Australia.