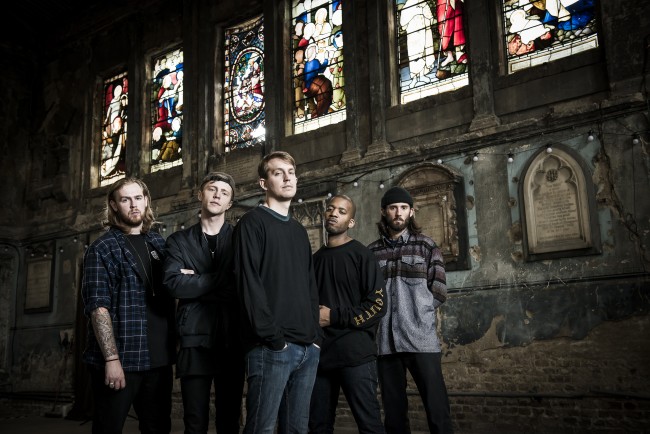 As the beating heart and song-writing partnership in TRC, Charlie Wilson (Guitar) along with Lasselle Lewis (Drums) began broadening and pushing their boundaries as Charlie explains; “I had some songs that I had been writing that didn’t quite fit with the band so I sent them over to Lasselle to see what he thought and he was blown away and totally into it.”

The band started to cement with the addition of former Heights frontman Thomas Debaere, whose throat shredding growl earmarked him as one of the new generation of formidable British metal vocalist. Bobby Daniels (Guitar) of Last Witness soon followed and the final piece was added during a TRC tour with South London noise-terrorists Rough Hands, where frontman Alex Dench was then recruited for bass and vocal duties.

Produced by Fredrik Nordstrom (At The Gates, Arch Enemy, In Flames, Opeth, Architects, Bring Me the Horizon) at his Studio Fredman in Gothenburg, Sweden, ‘Liberated Sounds’ subject matter hits on a number of recurring themes; mortality, relationships and religion all return throughout. Elaborating on the lyrical content Thomas reveals; “This wasn’t a conscious effort, they are just things that really struck a chord. Even the title, Liberated Sounds, was inspired by the feeling we all got from writing it, five mates writing music without restrictions or judgement.”

Opening with the intense ‘Burned by Faith’ it explodes screaming; “Burned by faith, died in faith/You say there’s a god

who cures darkness and pain, so you spread violence and hatred, to praise his name/He created the earth, the sun and the rain, you murder those, who don’t believe the same.” Far from being an anti-religious song, it’s more to do with what some people do in the name of religion; extremism battling against the overwhelming desire for peace as well as questioning the path extremists would have taken if there was no afterlife.

Unafraid to tackle difficult and distressing subjects ‘Die Alone’ is about facing your own mortality and realising the certainty of death. Thomas continues to delve into the belly of the subject matter stating, “It questions the privilege with which some people are able to live their lives in the face of the basic fact that one day we will all go out the same way.” Burrowing further into human emotions ‘Fire From The Sky’ is about the mental effects of war, “I had been studying the treatment of soldiers with shellshock and the lack of understanding in the First World War” he adds before elaborating, “I wanted to highlight the damaging consequences beyond the physical injuries suffered during war.”

The time spent in the studio with Nordstrom afforded them the chance to collaborate with one of their biggest influences in Tomas Lindberg of At The Gates who provided vocals on the newly recorded version of ‘Sands of Time’. Clearly won over Lindberg states; “I got contacted through the guys at Fredman studios, I know these guys pretty well, and trusted their judgement in checking this UK band out that were recording there. I was hit by the great mix of old school hardcore and crude death metal tone of the song. Did I want to come down and throw down some vocals? Hell yes! Turned out the vocals that I was going to use as a guide track were super ferocious and ass kicking, so that really fired me up to deliver on the highest level. These guys were super professional and I am sure that they will go far. I can´t wait to check out the full album when it´s out!”

In ‘Liberated Sounds’, Counting Days are to unleash one of the most formidable records of the year that will twist, turn and refuse to leave your consciousness.

Liberated Sounds will be released on Mascot Records/Mascot Label Group on 16th October 2015.