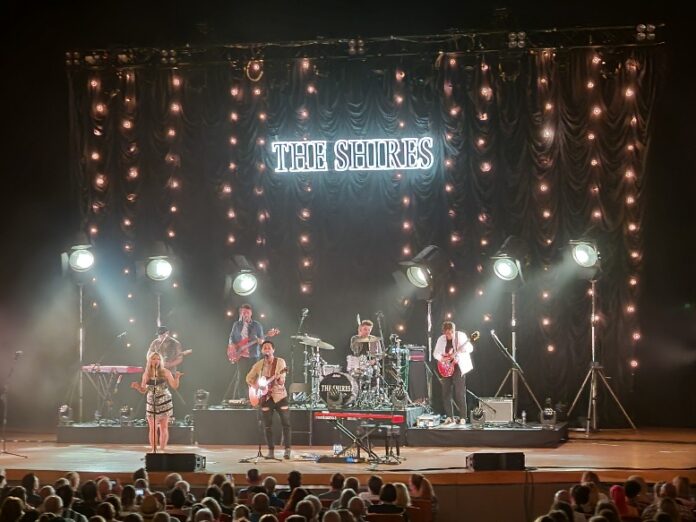 Kezia Gill might be from Derby but (and no disrespect is meant to the town up the A50 from here), when she sings, it doesn’t sound like anything other than the deep south. More Grand Ole Opry than East Midlands that’s for damn sure. She’s got some fabulous songs to go with her sensational voice. “Country Song” is surely an autobiographical thing about going to Nashville, but the one about her dad, “Local Man Star” is beautiful and will surely strike a chord with anyone who has lost a parent. Gill has got a lovely warmth about her on stage, and the playful “Thirties” (key line: “my hangovers last for three days straight”) giving way to “I’m Here” her anthem to mental health is typical of the differences in her songs. The last one “Whiskey Drinking Woman” is definitely one of the raucous ones, but they all have a singular thread – they are fabulous tracks, fabulously played.

Eric Paslay has just played Dua Lipa’s “Levitating” (I’ll be honest, Google was my assistant here) and he says to 2000 people that he his here to make his friends, when he says: “I’ll bet you are wondering why I am playing a Dua Lipa song, the answer is I believe a well-written song can come from anywhere”. He should know, because before he was a singer/songwriter he was just the latter, to the stars. As such, playing acoustic tonight, it feels like he’s stripped these back to basics, but like the best, they work in any format. “Song About A Girl” is brilliant, but it’s the way he weaves his stories in too “Still Haven’t Found What I’m Looking For” segues into “Barefoot Blue Jean Night” which he casually points out is the most played country song in the last decade (made famous by Jake Owen). The ballad “She Don’t Love You” is delivered with a real feeling, and couple more huge tunes “Wild Hearts” Keith Urban’s single, “Even If It Breaks Your Heart” the massive hit he wrote with Will Hoge are magnificent. It’s not just that, it’s that he’s delighted to be here at the home of Peaky Blinders and the way he engages with the crowd before the fun and frolics of “Friday Night” before he rolls it back to the very start with “Less Than Whole”. As a masterclass in how to deliver superb country songs, there won’t be any better.

The Shires live band members Olly, Charles, Rich and Thomas march on (this is actually more literal than usual) clapping. They are – throughout the rest of the next 80 minutes or so) as good as country bands get. Seconds after, they are joined by The Shires, Ben Earle and  Crissie Rhodes and it feels like you are watching something that is ready to burst through.

The pandemic has derailed them, of course (they released an album in 2020 the week before lockdown) but my goodness, the second city appears to have been waiting for this for all that time.

“Lighting Strikes” is smooth, its slick, but its so well done that you can’t resist it. That’s the band in a nutshell, too. As polished as any US Country stars there is, but then, guitarist Charles rips out an arena rocker of a solo, and it becomes obvious that this is where The Shires are heading (to be fair, they have already played with Ed Sheeran).

They’ve always had that ability too, it seems, as early work “State Lines” proves, but “A Bar Without You” (one that Earle wrote with Eric Paslay) underlines the quality of their new “10 Year Plan” record too.

A show where there’s a real bond with the and the crowd, “I See Stars” has thousands of mobile phones up in the sky, and it almost doesn’t matter whether it’s the old stuff “All Over Again” (the first song they wrote when the band formed) or the new stuff, “Plot Twist” – the one that Ben wonders out loud whether its country or not – being a fine example. It’s simply solid gold hit potential everywhere you look.

The section with just the two of them playing solo (“like the old days” says Crissie) is glorious, but special mention for “Daddy’s Little Girl” a song that deals with Rhodes’ grief at losing her father, and which visibly moves many in the audience.

When the rocking band as it were, return, they do so with “The Hard Way” and their “love letter to Nashville” as they put it, “Nashville Grey Skies” puts these two from the south of England into the south of the US and maybe that’s where their musical hearts are?

The overt pop of “Guilty” suits them so well, and as if to exemplify the way the crowd is with them throughout the singalong of “Tonight” carries on until they come back for the encore.

Even that is well-paced and clearly much thought has gone into it, “I Just Wanna Love You” is followed by what Rhodes (who is pregnant with twins) terms as “two bangers”. “Wild Hearts” is one of their best, but as a shared experience (which is a phrase we keep coming back to) then “A Thousand Hallelujah’s”- which sees people dance in the aisles – is the natural end.

The two main stars leave the stage, leaving the band to put the full stop to the night, and as they do , you reflect perhaps, in all candour, that you will struggle to see a more polished and well-planned modern country show this year. A near sold out Symphony Hall? Give The Shires five years and that 15 year anniversary gig will be in the arena just up the road from here.