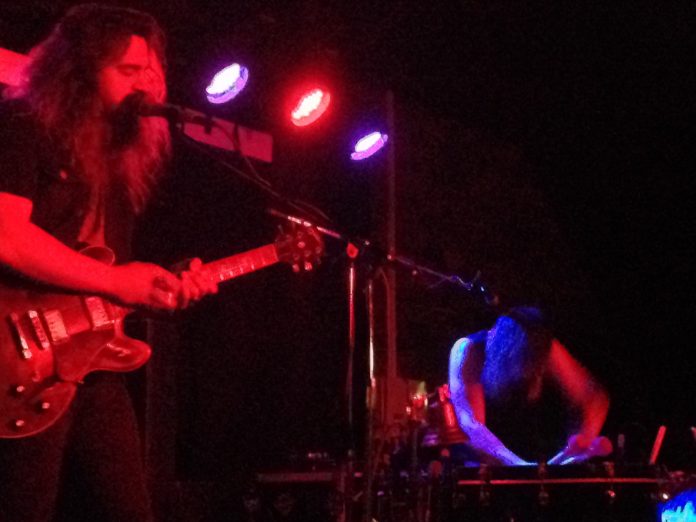 Seeing Piston a few years ago and seeing them now is like seeing two different bands. It’s been a while since MVM caught the Staffs five piece and initial thoughts tonight are: blimey, they are much improved. There’s a swagger about their rock n roll, there’s a groove about their songs that grabs you by the throat and demands your attention. “Playing With Fire,” the title track of their EP is one thing, the Aerosmith-like licks of “Locked And Loaded” are quite another. Rob Angelico on vocals anchors the whole thing in a slightly edgy way like Phil Lewis used to in LA Guns back in the day and these songs veer – and sneer – from trying to steal your whiskey, and your woman – and failing that they’d take both most likely. Even the slow numbers have a mean streak. “Breathe” is a bluesy wall of sound, there’s also a new version of “Misery” (“it was a bit depressing before”) which now charges around like it wants to take you out for a night on the tiles. They even get MVM bonus points for covering Creedence Clearwater Revival and even sound gremlins can’t disguise that “Proud Mary” is just an awesome song. Piston have the engine to keep rollin’ down the river themselves.

On their tour with The Answer in the spring The Picturebooks had shown that even for a two piece band they brought a new meaning to the word “primal”. Two piece bands always seem to have the most basic of rock n roll desires, look at The Graveltones for example, but then watch Philipp Mirtschink beat the living crap out of his kit on opener “PCH Diamond” and tell us that these boys don’t take it to the next level. Dear god, they don’t even bother with cymbals as that would be just too much accompaniment (there’s a bell, but that’s it).

Thing is, he’s only just getting started: “Woman (Tears Of Gold)” proves that he really means business and with Fynn Claus Grabke the perfect foil for him on the guitar and vocals – he too attacks his instrument as if he wants to do the thing harm – The Picturebooks really are something special.

Their recent record “Imaginary Horse” is very good and all, but to get the full majesty of TP you need to see them live. They are mesmerising, they are hypnotic and they are basically the heaviest blues band on the planet.

“The Rabbit And The Wolf” is as simple as a kick to the jaw and twice as effective, it’s turbocharged, mighty riff and screeching vocal really hit home, and are quite at odds with Fynn’s humble demeanour. By the end, the quite astonishing “Your Kisses Burn Like Fire,” the thought that this pair might actually be a force of nature isn’t too far away.

Earlier this year MVM saw Seasick Steve. The former busker makes his own instruments and held 3000 people captivated for over two hours. There are considerably less than that here tonight, but that doesn’t make what happened any less worthy. Essentially, it’s like this: If Seasick Steve was 30 years younger, and was having a really bad day and really wanted to discover his inner caveman, he’d sound like The Picturebooks.