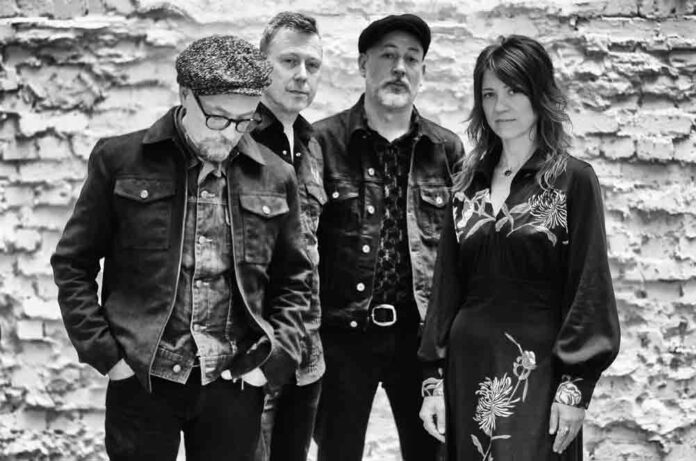 London’s own Miraculous Mule announce their first album since 2017’s critically lauded ‘Two Tonne Testimony’ with their haunting take on old traditional song ‘O Death’ accompanied by a spectrally beautiful video by Swiss artist Stéphanie Cousins. While its predecessor was a heavy, politically and socially aware garage rock album, ‘Old Bones, New Fire’ goes back to the band’s genesis, indeed to the very roots of rock itself. Returning to their love of early blues, gospel and folk music the band have made a raw, stripped back and passionate record that pays tribute to the many artists and songs that have inspired them over the years.

The album came together during the lockdown of 2020, frontman Michael J Sheehy explains “We had a vague plan to put on some kind of special hometown show to mark the 10th anniversary of our first gig back in 2010 but the pandemic had other ideas. While going through an old hard drive trying to clear space to record new music, I found some monitor mixes of a live session we recorded during sessions for what would become our first album ‘Deep Fried’ and these performances kind of blew me away. I shared them with the band and we decided to record some more material in a similar vein to create an album. As soon as restrictions lifted, we got together in a room and something magical happened”

The band have welcomed founding member Alex Louise Petty back into the fold and she sings lead on their reading of ‘O Death’ and says “Michael played me Vera Hall’s version of the song back at the beginning of the band, and while we can’t improve upon these old recordings, we can find our own way into the songs.” Alex continues “Like many a great folk song, O Death will always find its place in any era”

‘O Death’ is backed with the bands reading of ‘John the Revelator’, another traditional made famous by the late, great Son House and covered by The White Stripes and many others in more recent times.

The band have just announced a very special launch gig for the album on Sunday 14 August at the ornate Fitzrovia Chapel in London’s West End.