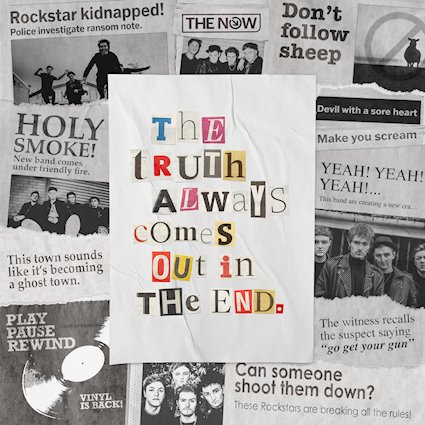 “The Truth Always Comes Out In The End” (and we can only hope there’s some kind of reckoning for those that deserve it for their lies  – I’ll mention no names…..) is, rather than being a comment on the current political situation, the new EP from The Now.

We’ve had them on this site as Band Of The Day. Hands up here, that doesn’t always mean we like the band, but a review does.

And quite frankly, there’s such potential on these five songs that it’s genuinely exciting to think where The Now might potentially end up.

They formed what became The Now in 2016, playing together since 2018, apparently, deciding to “find their sound”. Whether at that initial discussion they went “lets make something that sounds big, swaggering, hook laden and ready to crossover” only they know, but that’s the basic vibe here.

“Holy” is (literally) a three minute long statement of intent. Mentioning Stereophonics isn’t just because they are Welsh, but rather because its got the same type of feel. Callum Bromage’s guitar, though, soars. This is the type of solo that needs a fan in front of the six stringer in question so their hair flies about.

They sound like rockstars – which conveniently is almost the title of the next track. Liberal cowbell from Will Scott makes you imagine Thunder, say, but instead it’s the angular bass of Jay Evans that steals the show here, kind of. And the reason for the hesitation is Shane Callaghan. He is sensational on vocals, by virtue of his power, yes, but also that he sounds like no one else.

The same is true of the band. Reviewers like me love to chuck in an easy simile, but there aren’t any here. One minute you think you’ve got them pegged and they do “Shoot Them Down” (a single they put out) which skulks about, before flying into its harmonies and even the “whoa, whoa” chorus isn’t a cliché.

“Rewind” is as different again. Look, there’s a touch of Biffy Clyro here, I suppose, but when Callaghan whispers “gonna make you scream” a couple of times it’s done with a real, palpable menace. As if it dares you not to second guess them.

“This Town” takes it time to launch into what blokes my age assume indie “floor-fillers” for the kids sound like. The truth is I haven’t been anywhere near a dancefloor since way before The Arctic Monkey’s reckoned you might look good on one, but I can recognise energy, desire and ambition when hear it.

The Now have it in spades. Whatever this is, the truth of it is, that what we have here is a thrilling and exciting debut from a band you’d be stupid to ignore.