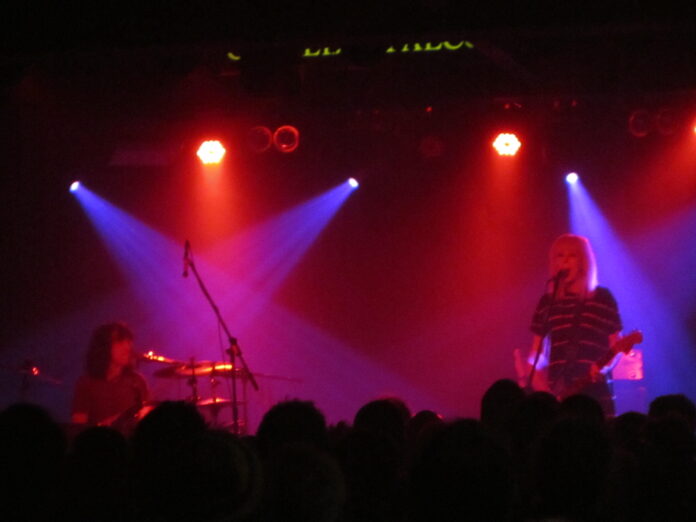 It became apparent after about half a dozen songs tonight what a wide ranging appeal that lo-fi psychedelic punk rock duo The Lovely Eggs have. The guy next to me turned and said “my grandkids love that song `Don’t Look at Me (I Don’t Like It)` and sing along to it in the car. The one with John Shuttleworth (Jilted John – Gordon Is A Moron anyone??) in the video”

This married Lancastrian couple arrived in Balsall Heath to kick off their latest trek around the UK and Ireland. There`s little fuss as they make their way through this jam packed crowd to get to the stage and open up with `This Decision`  from their last album `I Am Moron` released in 2020. The song is a blistering shouty attack on greed and mindless consumerism and sets a marker down for the rest of what`s to follow. We have further cuts from the latest release with `Still Second Rate`, `The Digital Hair` with its lyrical disdain for modern culture and the brief fuzzy `I Wanna`,

We have the quite hypnotic `Magic Onion` and the real rock out of `Bear Pit` before the pair take a breather and Holly talks about David`s additions to their stage technology focussing on an adapted fuzz pedal that seems to work opposite to how it should although when asked for his opinion David thinks that it works fine and leaves us with the impression that the user`s to blame. Brave fella.

A tribal drum beat leads us into and through the trippy `You`ve Got the Balls` and the wonderfully titled and dreamy `Please Let Me Come Mooch Around Your House`.

The psychedelic `Witchcraft` and the stop start `Long Stem Carnations` get an airing before the mad but wonderfully infective ` Wiggy Giggy` has the faithful bopping along. As they play the thoughtful `Fuck It` Holly attempts to organise a kind of slow burn mosh circle at the front before the pair discuss the merits of taking Gaviscon in order to prevent heartburn from drinking cider and Holly praising “the lasses down the front”  in her wonderful dialect. Captain Kirk or William Shatner`s boyish enthusiasm after returning from a day trip to space gives Holly renewed inspiration in life, which seemed encouraging and unreservedly optimistic in these dark times.

The home stretch includes numbers like the irresistible earworm of  `You Can Go Now` and it`s long list of things that could be discarded such as Anthea Turner and microwave meals, `Food` with its crackers singalong chorus of  `We were e-a-e-a-e-a-e-a-e-a-e-a tin` and the fuzzy blissed out `I`m With You`. The couple leave us with the final track tonight with the spaced out scorching `Return Of Witchcraft`.

The only other band I know from Lancaster are the superb rock band Massive Wagons so I really don`t know whether it`s the water of the River Lune that makes these bands so catchy and appealing.

As with other two piece outfits like Royal Blood and The Virginmarys. The Eggs certainly can blast out a tune but with lyrics when analysed that have some deeply thoughtful social commentary at times.

I`m sure the guy next to me`s grandkids would have thought that tonight was Eggnergetic, Eggscellent and an Eggstraordinary show.  I`ll get me coat!!

Catch you next time at a bigger venue.