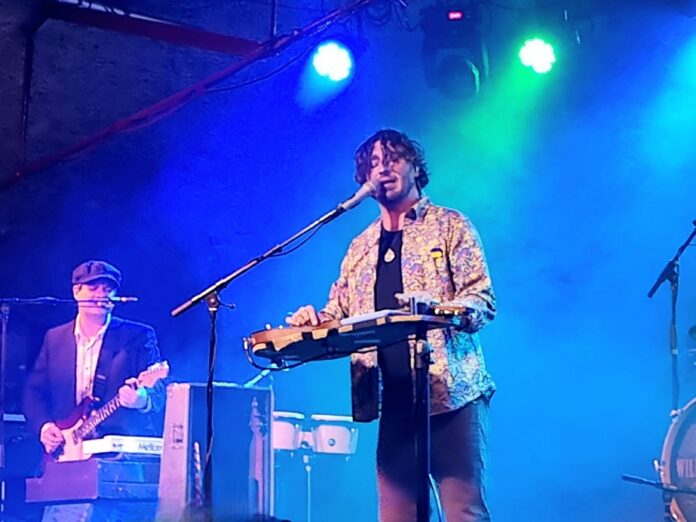 There are occasions when you don’t know someone at all but feel a kinship. Mike West is one such artist. For one thing, he has a thing called “Nuke Song” which has its essential premise that if we stopped spending trillions on killing people and fed them instead, we might be better off. Politics aside (and I suspect we’d find much to agree on) there’s also the small matter of “Ballad Of A White Collar Arsonist”, which deals with the idea that you hate your job so much you burn the office to the ground. I am offering no comments on that (ahem!), beyond the fact that this pair of songs suggest that West is very much his own man. Arriving from Birkenhead on his own, with his acoustic guitar, his denims and his questions like “what’s cruising and why are West Midlands Police so against it?” And an hour to do his thing, he enjoys it as much as he is enjoyable. His work like “Mothman” and “Next Life” seems to lurk in the darkness with a real intent. “The Company I Keep” concerns itself with drugs, “No Graves” concerns itself with the pointlessness of going to gravesides to remember people, and “Rock Ferry” with his hometown. All of these could – conceivably – be any other alt-country act, but not delivered with this much gravel. No one else, I’d wager either would cover “Rainbow In The Dark” – I reviewed his 2017 record on these pages and he helpfully explained to me back then that “this isn’t a dog shit of an EP”. In that spirit, this most certainly isn’t a dog shit of a performance either, and well worth his trip down the M53.

Right in the middle of this show, Wille And The Bandits play “Mammon”. A track from their early days (“we didn’t think we’d make it over the Tamar Bridge” offers Wille Edwards), the new look WATB band play it, and they play it in a totally different style to the weather-beaten folk music of the past and it seems to exemplify the fact that Edwards and this band of Bandits are constantly evolving.

A couple of months ago they released “The Day The World Stood Still”. A brilliant record. Perhaps their best (it was called “a thing of real beauty” on these pages) but certainly their most diverse. They clearly are fans of it too, given that so much of it is played here.

“Caught In The Middle” is a massive slab of psychedelics, “Refuge” – one of its highlights – follows, but as always with WATB its about the fun they are having on stage. After “Move Too Fast” Edwards thanks the other members of the band for being “Boyzone” with their harmony vocals, and there’s such a warmth about what they do.

The phrase “multi-instrumentalist” could apply to all of them, Matthew Gallagher is particularly outstanding on keyboards and various other paraphernalia, but Edwards himself is stunning. “Keep It On The Down-low”  from their “Paths” album in 2019 sees him play his slide guitar and my goodness, how good it is.

“Solid Ground” a track that Edwards wrote for his daughters feels, as it did on the album, to be an important track. Here, it is basically the centrepiece and the versatility of this band is there for all to see when they follow it up with “Good Stuff”. Edwards is actually jumping off the drum riser at one point and again, it’s the smiles that you can’t fake, as he turns to his bandmates and says “that was some proper rock shit! We’ve nailed it for the first time on the tour!”

In truth, there wasn’t a lot they didn’t nail. And everywhere you look there’s something with just a little more soul (in every sense of that word) than before. “I’m Alive” almost swirls, “1970” sounds even better now than when they’ve played it in the past, and is a worthy set closer.

The encore, beginning with “In It Together” very much roots it in the here and now with its attack on politicians in this decade, and “Bad News” albeit five years or so old doesn’t half seem prophetic given the constant barrage we are living under.

And maybe because of that, nights like that are increasingly an escape. Maybe they are for the bands too? Wille And The Bandits might still not be able to find a decent pastie in the Black Country (they have been opining on this since the time I saw them open for Walter Trout on this stage) but they’ve found their vibe.

This is now one of the best and most innovative bands in the UK.