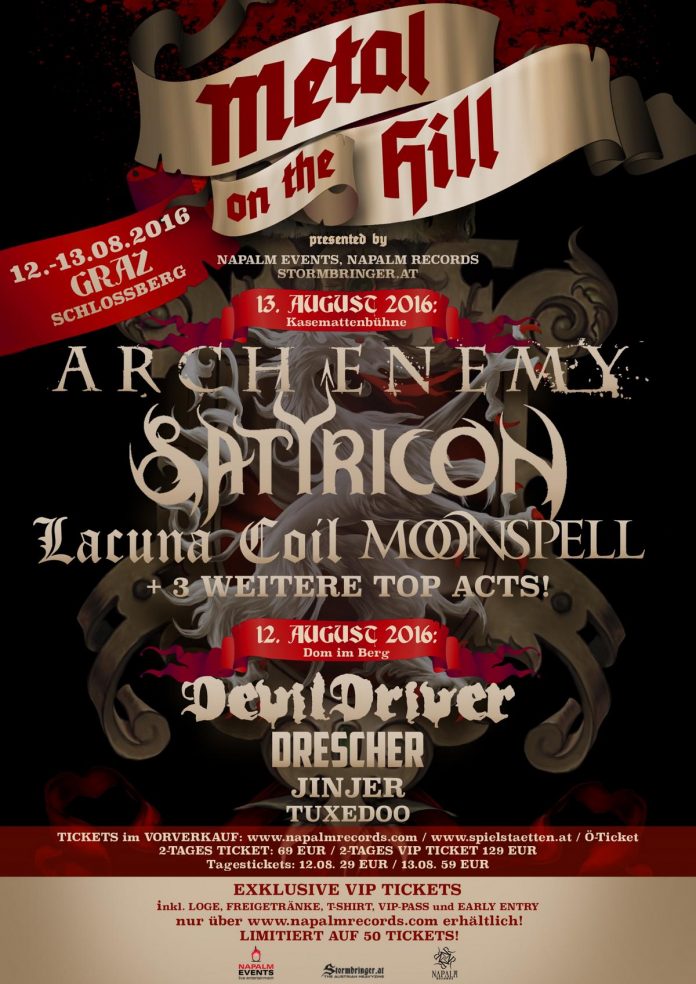 And the hills are alive

Is anybody surprised that a town bearing a name like Eisenerz (= iron ore) is home to an absolute metal giant like NAPALM RECORDS? Of course not. Much more baffling though is that the Austrian state of Styria – to which Eisenerz belongs – hasn`t seen a metal-only festival in ages! Luckily Napalm`s live department NAPALM EVENTS has now stepped in to riff all of Southern Austria out of its slumber…

In cooperation with “Spielstätten Graz”, this one will have its baptism of fire in 2016 at the picturesque “Schloßberg”: METAL ON THE HILL is the name of the game!

Directly beneath the highest point of Styria`s capital – the plateau of the Schloßberg – lies Graz` most popular open air event location: the Schloßberg stage Kasematten. A stage plus a vast auditorium in the old fortress walls had was erected in the 1930s – an absolute trademark of the city! Especially during summer nights and open air events the place is brimming with darkly romantic atmosphere. A sliding roof protects the audience from any fitful weather.

In addition, the first festival day (attention: limited capacity!) will go down at the “Dom im Berg”
(= mountain cathedral). This venue is definitely Graz` most unique event location! In 1999, this multifunctional spot was carved out of the mountain and opened to the public at the 2000 state fair.

A more than stately and unforgettable backdrop that is fiercely guarded by the festival mascot – the Styrian Panther. Catch a glimpse of the locations here:

It`s a given that NAPALM RECORDS will go big and international with its first very own open air festival:ARCH ENEMY, SATYRICON, LACUNA COIL, DEVILDRIVER and MOONSPELL will all play exclusive Austrian shows. Black metal pioneers SATYRICON even boast an exclusive „Nemesis Divina“ anniversary set! Popular national acts such as DRESCHER and TUXEDOO are also part of the bill. More stunning acts will be announced late in March!