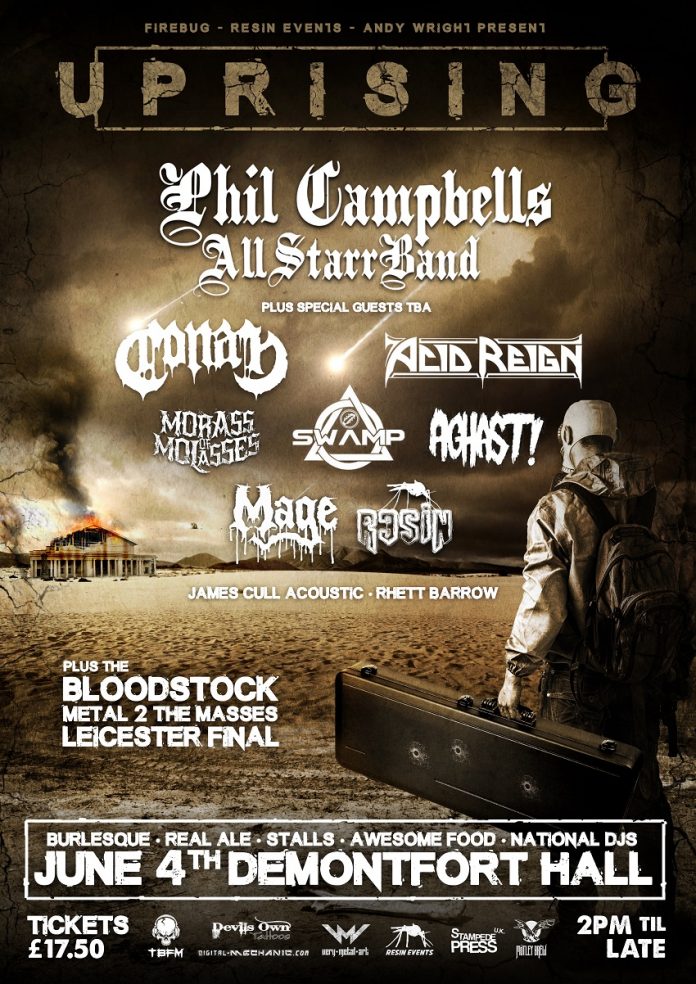 You thought the football team was spectacular? Check this out. Take that Jamie Vardy!
Resin Events in association with The Firebug & Andy Wright present THE LEICESTER UPRISING – A full day of metal over 3 stages featuring a host of the heaviest bands on the touring circuit along with the final of the East Midlands Bloodstock Metal 2 The Masses.
Motörhead’s very own Phil Campbell will be bringing his All Star Band along with confirmed acts Acid Reign , Conan  , AGHAST , Morass Of Molasses , SWAMP DELTA & Mage plus acoustic sets from Resin , James Cull & Rhett Barrow .. all bringing the noise alongside the bands to be featured in the M2TM Final!
With plenty more bands still to be announced we’re also offering a Burlesque Acts, Comedians, Real Ale Bar, Food Court, Mini Market, Gaming Area and loads more!
The Uprising takes place on 4th June at the iconic Leicester De Montfort Hall.
Tickets – link  https://www.tickets.demontforthall.co.uk/en-GB/events/uprising/2016-6-4_13.30/de%20montfort%20hall_?back=2&area=9f75a457-b53d-481b-b737-a3e2560ade68&type=ga
For updates and more details – https://www.facebook.com/events/546918438807219/
One day of Metal not enough?  Try the Firebug Friday Warm Up Show.
https://www.facebook.com/events/132612610434075/
Spread the word – The Uprising is on!