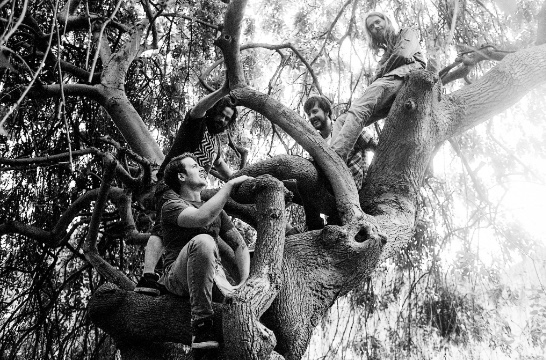 Originally hailing from the north of England, guitar player and vocalist Jack Townley and close friend and adversary Sam Hart came together through a mutual love of all things heavy in 2013. After countless jam sessions and a joint decision to stay in the big smoke, the duo set out to clear a sizeable path in pursuit of their own interpretation of metal, heavy rock and progressive psychedelia.

Joined by bassist Peter Holland (Trippy Wicked, Stubb) and Canadian sitar player Riley MacIntyre, having only performed their first gig as a quartet in April 2014 you’d be forgiven for thinking that Elephant Tree are something of an unheard/untested prospect for 2016. However, less than two years on from that first official outing this couldn’t be further from the truth. Embraced by London’s underground metal scene practically upon arrival, Elephant Tree now serve as a thrilling live fixture thanks in no small part to their relentless gigging and release of their, “strong, forward-thinking and nuanced debut” (The Obelisk) Theia on Magnetic Eye Records. A record that fused progressive metal with experimental and meditative shades of eastern mores, throat tearing doom and riffs seemingly cast from the funeral pyres of forgotten worlds.

Retiring to Paul Epworth’s Church Studios in Crouch End with Riley stepping back from the stage and heading up production, joined by assistant engineer Adam Durbridge in late 2015, the fruits of their brand new album Elephant Tree are harvested from a tireless year of live shows, both here in the UK and across Europe. Mixed by renowned engineer Matt Wiggins (U2, The Pop Group, Foster The People) the album was completed less than a week later, and ready for an early 2016 release.