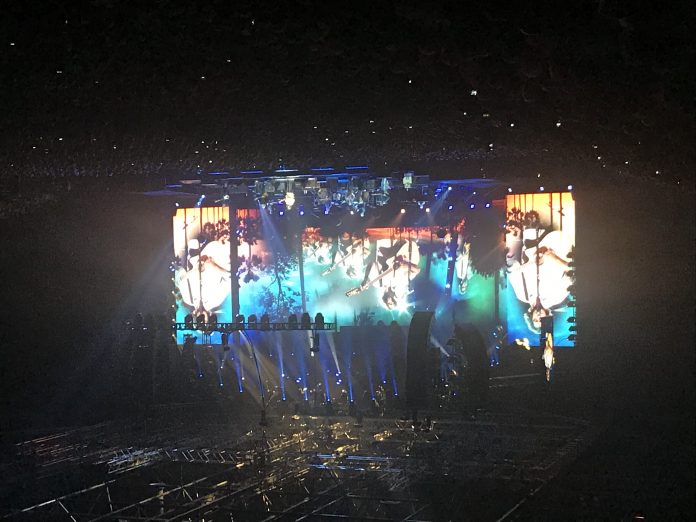 Each of the long standing members of The Eagles gets a turn at the mic to talk to the crowd. During his section, Don Henley, pretty much nails the night in two sentences: “We’re gonna play two and a half hours of music for you tonight. No pyrotechnics, just some guys playing guitar and singing songs.”

Give or take the odd horn section, and a light show of huge scope, to be fair to Henley, that’s the gig in a nutshell.

It all begins in pretty understated fashion. All the guitarists – and there are a lot of them, these Eagles come in a flock – are (literally) under the spotlight for “Seven Bridges Road” before it all really gets going with “Take It Easy”.

“…..Easy” is the perfect intro to the band in 2019, laid back, relaxed, comfortable and a classic tune that everyone knows and loves.

Strap yourselves in, then, for a lot more of the same.

Four of them follow in succession. “One Of Those Nights”, “Take It To The Limit”, Tequila Sunrise” and “Witchy Woman” – all of which could – and perhaps would – have been an encore for anyone else, but we’re dealing with bona fide superstars here.

Superstars, though with a fresh look. The tragic passing of Glenn Frey has seen him replaced with his son Deacon and country star Vince Gill is here too. Both do a fine job, indeed Gill’s “Don’t Let Our Love Start Slipping Away” is a highlight of a middle section that veered a little close to the middle of the road for a spell.

Both Henley and the outstanding Joe Walsh get some solo time. Henley dusts off the wonderful ode to playing the waiting game “Boys Of Summer” while Walsh, who is really the only extrovert in the band, rips through a brilliant “Walk Away”.

Walsh then shows his skill as a guitar player too. The slide drenched “Heartache Tonight” being a highlight.

“Life In The Fast Lane” ends the set, sort of. Except there isn’t a person here who doesn’t know that if they don’t play “Hotel California” then they could never leave, as it were, and there’s a reason that is so well known. It is stunning.

There’s another encore – “Desperado” is a jewel here – and a third with their first number one, “Best Of My Love” bringing the curtain down on what is a slick – but fabulous – operation.

A masterclass in arena rock – as someone said on the way out – “I’ve discovered that I don’t not have a favourite Eagles song” and that’s what this was about.

Never viscerally exciting, but wonderfully warm and wonderfully executed, this was a night for a peaceful, easy feeling. Which would be a good title for a song…..