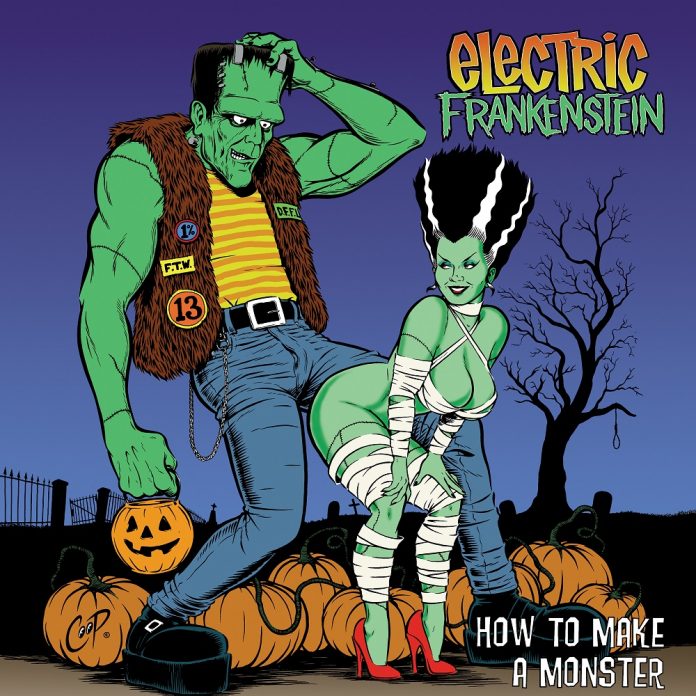 I was watching the cricket world cup the other day (for any American readers, its like Baseball, but way better and goes on for days), and someone new came into bat.

One of the commentators said to the other: “didn’t you play with his dad?” And the other replied: “yeah, and when I start commentating on the grandsons of people I used to play with I am going to retire.”

In that spirit then, let me say this: 20th Anniversaries of albums I bought are fine, when it gets to 40, I am finished.

“How To Make A Monster” was one of those albums….seminal, integral to the tastes I developed.

Listening to it now takes me back to that time when we’d first got the internet at home and I had little better to do than cruise round trying to find new music.

And when you liked the bands I did then – Backyard Babies, Hellacopters, Honeycrack, Hanoi Rocks – you kept running into the name Electric Frankenstein.

So I got this record.

The one that is now twenty years old and getting the vinyl reissue treatment. And I can pay it no higher compliment than it is as good now as it was then.

EF were one of those bands that we used to say “why aren’t they massive? If all these people stopped listening to chart stuff, they’d be huge” while we were secretly glad that they were ours, not theirs.

In truth, if you like “Cut From The Inside” then you’ll like the rest of it. Guitars slash, “crowds in, the outcrowd’s dead” sings Steve Miller, and that’s basically it. They were the New Jersey outsiders, the members of other bands – and I swear to you, there’s only LA Guns that have ever had more members, but this was never a side project. “Speed Girl” is now and was then, something special and the solo distils the very essence of snotty punk n roll.

Listening to the likes of “Use Me” shows either how far ahead of their time Vain were, or how much of a debt Electric Frankenstein owe to sleaze, take your pick, and there is something just a little unsettling about “Friction” and I’ve never been quite able to decide what it is.

One thing that has changed in the 20 years is my favourite song amongst these. Now in my 40s “Feel The Burn (Chronic)” speaks to me in a way it never did. “if necessity is the mother of invention, then boredom is the father of action,” spits Miller and that’s pretty much an anthem for the terminally restless.

“My World” chugs with a metal heart, not far from Hardcore, I guess, but that’s all clearer with hindsight, and there is a genuine feeling about “Don’t Know How To Stop You” that it wouldn’t stop if it could.

Resolutely fast and belligerently furious, “Up From The Streets” just slays, “Pretty Deadly” goes on the attack and if that one is happy to fight anything, then “Something For The Pain” is in no doubt what it’s target is. “Save me from the music I can’t stand” – which it turns out is anything bland – and when it suggests that “I’m Not Gonna Be Like You”, you’d best believe it. “I’m Not Your (Nothing)” is a love song to nihilism, it seems to me, and the last one,“Phatty Boom Batty” probably doesn’t need describing.

Except to say this, it’s the closest thing to arena rock they ever had. And its an ode to pizza, beer and weed. That’s how they do things.

Look, if you didn’t hear this back in 1999 and you like filthy, fast and rock n roll, but with enough sugar that it comes with a glitter cannon that shoots Skittles, then this is how it should have always been done. Along with the Backyard Babies second album, and The Hellacopters entire back catalogue it was as good as it ever got.

If you got it then, you know that, right?