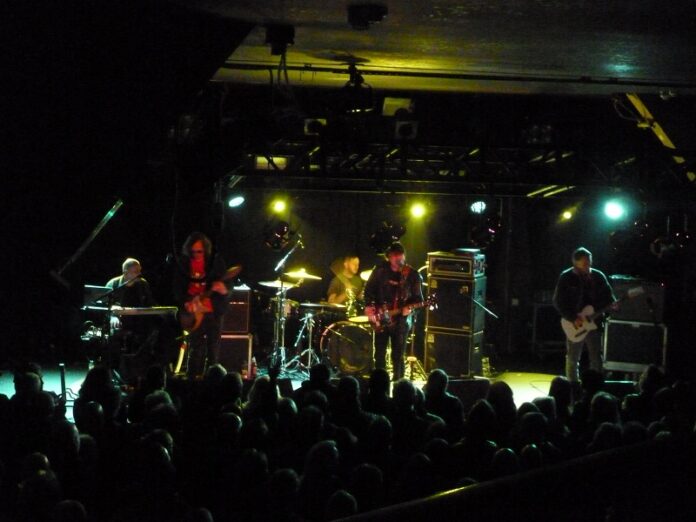 I`m not sure if I’d ever seen The Membranes before tonight, I know I saw journalist, author, and musician John Robb`s other band Goldblade supporting The Only Ones at the Wulfrun Hall in Wolverhampton in 2007. The Membranes today consist of John Robb, Peter Byrchmore, Mike Simkins and Amelia Chain. During the next forty five minutes we were led through a mesmerising and compelling mix of dark goth tinged energetic post punk with tracks that were mainly culled from the band`s last release ` What Nature Gives…. Nature Takes Away`.

Songs like `Black Is the Colour` and `Deep in the Forest Where the Memories Linger` were wonderfully hypnotic, while `Snow Monkey` was more assertive with lyrics that were almost rapped before the number ended quite abruptly. I loved the bass driven `In The Graveyard` which had a melodica part way through which almost gave it an Augustus Pablo dub reggae vibe. The set closed out with `Myths and Legends` as the singer encouraged us that this would be our last chance to dance.

There was much to enjoy in this bands all to brief set and to top it all I managed to get Mr Robb to sign my much thumbed copy of his `Punk Rock An Aural History` in the foyer afterwards.

The Chameleons shone brightly and released three post punk / new wave albums in the early to late eighties before breaking up, only to reform in 2000 for three years and one album before original members Mark Burgess and Reg Smithies re-united once again and have been on the road since last year.

There`s little fuss as the band arrive on stage and share a set that has a sprinkle of tracks from throughout their career. We have the dreamy and questioning `Silence, Sea, and Sky` early on along with the complex `Here Today` a song that was written about getting blitzed. `Pleasure and Pain` is shared before the fast paced `Return Of the Roughnecks` blasts out.

The introspective `Perfume Garden` is dusted down before we enjoy an extended version of `Singing Rule Britannia (While The Walls Close In)` with snippets of The Clash`s `White Riot`, Joy Division`s `Transmission` and The Beatles `Get Back` mixed in. The home stretch includes `Soul in Isolation`. The almost tribal `Swamp Thing` , `Second Skin` before closing out with `P.S Goodbye`

The band are encouraged to return and do so with a three song encore that included the edgy `Caution`, blistering `Inside Out` before finishing with the wonderfully intense `Don`t Fall `

Tonight, was a superbly thoughtful, well-constructed and delivered ninety minutes of aural pleasure. Singer Mark Burgess doesn`t say too much or really needs to but allows the music to do the talking for him. When he does share his thoughts they are of a more of a contemplative and slightly psychological bent. I found myself just wallowing in this wall of sound and found it was the kind of show where you reflect on it more the next day when you`ve had time to digest it.

The band tour their debut studio album `Script Of The Bridge` next spring so if you didn`t manage to catch this tour you have a further chance next year.