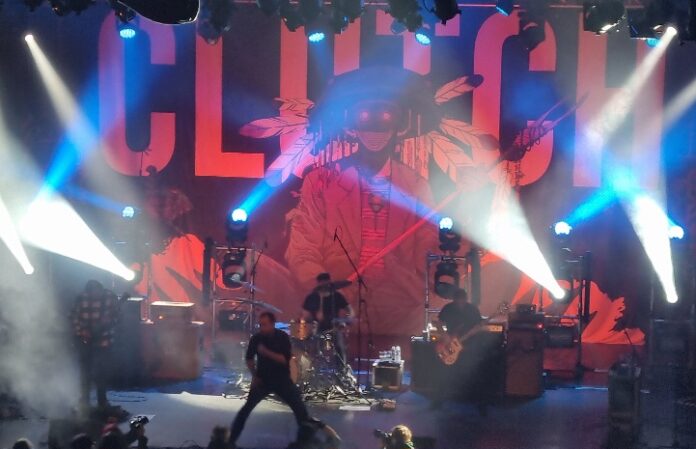 In the end, it all comes down to this.

At the conclusion of the gig tonight Clutch play “The Face” as the last song in the encore.

At its heart, it contains these words: “One thousand Jazzmasters/Sunk down to the bottom of the sea/What rabid religion/Drives them apart?”

And the place goes crackers.

Earlier in the set, Neil Fallon had said to the crowd: “you don’t have a clue what I am talking about, do you?”. Well no, but then, this is Clutch.

About 90 minutes before “The Face” the four men who have basically always been Clutch, effectively pop on to the stage and stand there. “Well, good morning” offers Fallon. Then it happens. That thing that always happens at the start of Clutch gigs. The switch is flicked and Fallon is off.  It’s a phrase you use so often with Clutch that it almost seems like a cop-out, but “like no other” and this is like no other band and he’s like no other singer.

He always seems possessed by something when he’s onstage. And as “Red Alert (Boss Metal Zone)” from the 2022 record “Sunrise On Slaughter Beach” seems to envelop him, its quite a sight.

Songs come and go in a blur. A good smattering from the new record, but others too, from the past. “The Mob Goes Wild” seems apt (and was the record they’d just released when I saw them for the first time in the middle of the last decade. They haven’t changed, perhaps they’ve just got better).

The one-two of “X-Ray Visions” and “Firebirds” played together like on the album is utterly glorious. Barmy, but glorious, and its instructive to look at Tim Sult on guitar and Dan Maines on bass at this point. They barely move. Fallon, though, he’s a dervish. Never still, he’s brilliant at this, he really is. And drummer Jean-Paul Gaster is the perfect backbone.

A set, tonight that is shorn of anything from the really early 90s days, does go back to 2018 for “Ghoul Wrangler”, takes in “Earth Rocker” – and that line about “if you’re gonna do it do it live on stage always seems to be loaded with importance – then pops back to 2004 for “Subtle Hustle”. How they pick these setlists, who knows? But whatever mood they are in tonight works, superbly.

The words “let’s get weird!” scarcely seem to be needed, but nonetheless, that’s what Fallon says before “Skeletons On Mars”. You can see what he means when the Theremin appears and he appears to be enchanting it to do his bidding.

The keyboard on the left of the stage as we look has been conspicuous by its silence up to this point. Per Wilberg once of Opeth and Spiritual Beggars appears for a race to the finish that includes a wonderful “Power Player”, which would have been the highlight, were it not for the presence – for the first time since 2012 – of the anthem “The Devil And Me”. An incredible song, it shines here.

“Jackhammer Our Names”, as it does on the album, is the last song and just like the record, Fallon doesn’t half sound like Nick Cave as he delivers the chorus.

They are back (and it always strikes me as odd that Clutch, the almost anti-rock stars, do the rock star cliché) for “10001110101” (“we can only play this when we have a keyboard player and we’ve got one tonight”), before Fallon rips out some mean slide guitar for arguably their most well known tune “Electric Worry”. There’s something very Clutch about not ending with this, though and instead allowing the bonkers “The Face” the honour.

Clutch are sensational, pretty much every time they play, but seemed especially on form here. Maybe it’s the four years gap since I last saw them, but this seemed to transcend the norm. “We want everyone to leave with smiles on their faces” the singer had said. Before adding: “Not me, I am a cranky fucker. It’s my default setting.” No problem. 1200 to one ain’t a bad ratio, as Clutch deliver one of the gigs of 2022 in a way no other band on earth would or could.