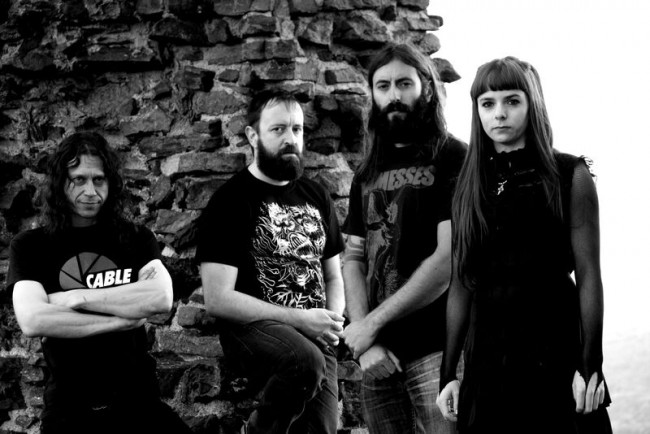 Their name is surely a joke. The music is no laughing matter

New Heavy Sounds are ready to bring you the first vinyl and cd offering by Welsh doom outfit Mammoth Weed Wizard Bastard, or MWWB as we like to call them.

‘Noeth Ac Anoeth’ is an old Welsh phrase which the band tells us is a druidic concept, meaning an abode of existence, or Hades crossed with nothingness, it captures the mood perfectly – mysterious, dark and spacious.

Though this 3 tracker could possibly be called a mini album, rest assured, at over 50 minutes of music you will feel at turns, high, low, pummelled, seduced and sated.

MWWB’s sound has all the crushing weight and expanse of Ufommamut, Windhand or Yob, combined with a love of the hypnotic grooves of Amon Duul II, the cosmic soundscapes of Hawkwind and Cult of Luna at their most cosmic, and a dose of dark psychedelia. In fact, this Wrexham quartet has created a sound wrought from the very forge of Vulcan itself.

Here you have the first vinyl outing of ‘Nachthexen’ a 30 minute plus doom rock space opus. A shifting, progressive epic of plutonium weight, the ideal soundtrack to your next intergalactic voyage or black hole exploration. Crammed with a dark medley of riffs and textures, and topped off by MWWB’s secret weapon, the angelic siren song of vocalist Jessica Ball.

It announced MWWB’s arrival on the scene at the beginning of 2015.

Not only that, Keranng made MWWB ‘Band of The Week’ and when TapeWorship Records issued it on cassette, it sold out in two days.

‘Les Paradis Artificiels’ is another downtuned epic, the mammoth riffs and shifts are still there, but on this the vocals are more present, mesmerizing and fully integrated.  It’s like The Cocteau Twins or My Bloody Valentine landed in a doom band and said ‘ yeah, this works’. Listen here:

‘Slave Moon’ is experimental, progressive even. 10 minutes plus of thumping atmospherics and ascending guitar layers, and some pretty filthy, yet catchy riffing.

Ladies and Gentlemen, please put on your cans, light up a big one and step into outer space.

Produced to weighty perfection by Chris (Conan) Fielding, MWWB are proving that doom metal is alive and well, and still capable of evolving beyond the wall of Sleep. Expect their full startling debut in 2016.

‘Noeth Ac Anoeth’ is released by New Heavy Sounds on CD, Download and limited edition transparent frosted vinyl, 300 only. With a free cd of the album included as well, it will land on December 4th.