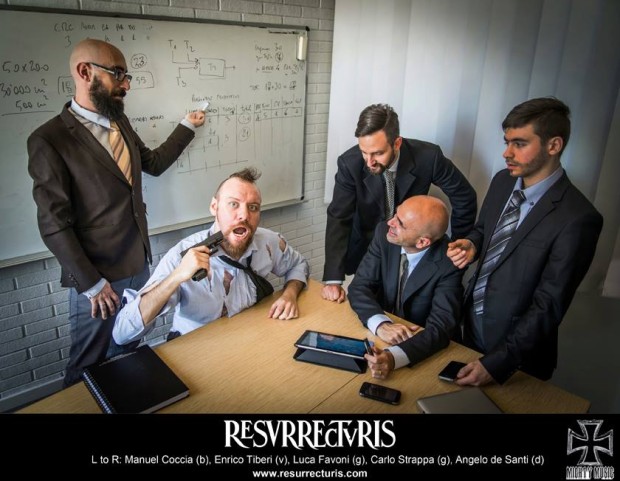 Work is the enemy say these grindore monsters

A brand new cover of Attitude Adjustment “Working Class Pride” has been made available by Resurrecturis on their YouTube and Soundcloud channels. Resurrecturis dared a very intense take on an old 80’s American hardcore classic that in the hands of the Italian monsters turns into a savage ride with tinges of grindcore and black metal fury.

The song was recorded live at Lullaby Studio during one band rehearsal and was completed with the addition of vocal lines by former Resu-vocalist Ivan Di Marco (now with HC legends Straight Opposition) and bass tracks by Marco Morosini (ex-Eversor, ex-The Miles Apart, now with old school death metallers, Mannaia).“Since our forthcoming album, “Nazienda”, deals with work and office life, I thought “Working Class Pride” by Attitude Adjustment fitted perfectly with what we were working on. It’s a pretty old song that not many younger kids are familiar with. But it’s a fantastic tune and the lyrics are also great and pretty unusual when it comes to 80’s US HC.

We sped up the song a bit and added some contemporary undertones, to make it sound more interesting.
Besides we were very glad to spend some time with two friends from the old days who also happen to be respected personalities of the Italian HC scene.” (Carlo Strappa / Resurrecturis)

“Working Class Pride” can be listened on Resurrecturis YouTube and Soundcloud pages and for the moment there are no plans for an official physical release. Resurrecturis also took the time to create a customized Attitude Adjustment-inspired logo which, in true punk fashion, is ironic and meaningful at one time.

Resurrecturis began in Italy in 1990 and has been around in some form ever since.
During the course of its history the band has released 3 full-length albums, plus demos, mcd’s, ep’s and has toured/played with the likes of Master, Impaled Nazarene, Vital Remains, Dismember, Macabre, etc.