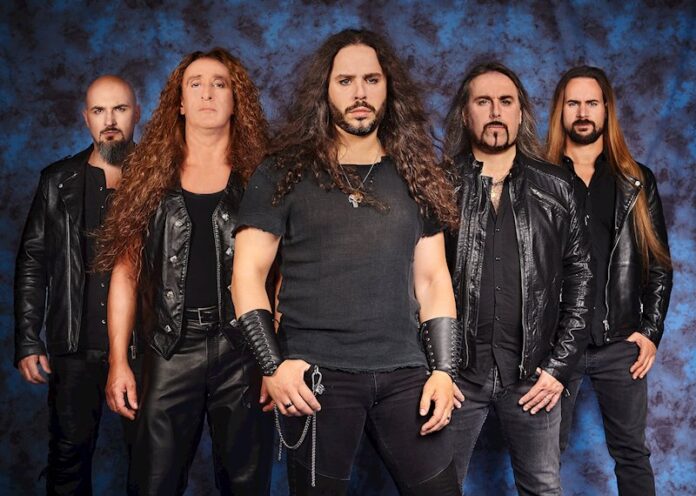 RHAPSODY OF FIRE release new video for ‘Magic Signs‘, taken from album ‘Glory For Salvation’, out now on AFM Records.

Check out the video here: https://www.youtube.com/watch?v=SZr6_z9bLTA

Eleven epic songs, plus two bonus tracks, take you on a wild ride into powerful, symphonic metal grandeur! Catchy hooks, a sophisticated orchestration and the distinctive voice of frontman Giacomo Voli make Glory For Salvation not only a glorious, second piece of the band’s trilogy, which started with their latest 2019-album The Eighth Mountain, but a captivating and true metal masterpiece. The energy of each band member is flowing with precision and fury, opera choirs intersecate with Voli’s superlative vocals in a cinematic orchestral polyphonic escalation towards the highest epic musical peaks.The deeply inspiring solos by guitarist Roby De Micheli and Alex Staropoli’s magic ochestrations once again create the band’s renowned Film Score Metal at its best!

While RHAPSODY OF FIRE already released one of their bonus tracks, “Un’Ode Per L’Eroe”, on the day of the album release, they are now preseting a brand new video for the English album version of the track!

“Magic Signs sounds like you are in a dream, and the idea behind the videoclip was to make it look like a dream.” Says Alex Staropoli. “Fascinating cold natural landscapes underlines the glorious, marvellous music, and the deep meaning of the beautiful lyrics.“

RHAPSODY OF FIRE belongs to one of the most popular metal acts in Europe, who have raised the bar for their genre. They are the undisputable founders of epic symphonic metal, combining Hollywood-like sound landscapes and heavy power metal. The numbers are telling its own tale – with a huge, worldwide fanbase and 2 million sold records to date, while “The Eighth Mountain” entered the German album charts at a phenomenal #22 – RHAPSODY OF FIRE owns its throne in the first league of metal. Their latest album, which has been lauded by both fans and the international music press alike, is the unquestionable proof to that.

Glory For Salvation was mixed and mastered by Sebastian “Seeb” Levermann, and saw the light of day on November 26, 2021 through German powerhouse label AFM Records. If you haven’t done yet, grab your copy now at THIS LOCATION!