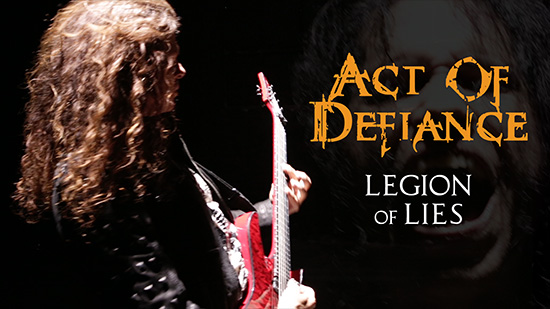 ACT OF DEFIANCE have partnered with Yahoo! Music to exclusively debut their official new music video for the scathing track “Legion of Lies,” which was directed by Corey Soria (Danzig, Hollywood Undead). It can be viewed now at Yahoo! Music.

Shawn Drover (drums) states: “The track, ‘Legion of Lies,’ is a very direct, double bass drum infused Heavy Metal song that showcases Henry’s vocal diversity a bit more-Injecting a bit more melody where needed gives the song a bit more of a dynamic feel though still retaining the heaviness of the song throughout. Every song on Birth and The Burial stands on their own and sound different from each other, yet they are still 100% Heavy Metal. ‘Legion of Lies’ is a great example of that.

“Shooting this video with Corey Soria was seamless, fun and very exciting. Corey really has some original, interesting ideas which he certainly applied to this video. The end result is a fantastic video, which I hope you enjoy as much as we did creating it.”

Chris Broderick (guitars) further adds: “‘Legion of Lies’ is the song that kicked the formation of AOD off. It was the first song Shawn wrote and the first song that we sent to Henry to record vocal demos to. In my opinion, it is one of the best written, most concise songs on Birth and the Burial. It has an aggressive upbeat triplet feel and a very dark harmony about it that I think people will dig. The break-down to the solo has a contrapuntal theme that maintains that dark mood leading into the solo, which is a PIA to play and should keep guitar aficionados happy Hahahaha. I am really excited to see what people think of the video and Soria’s vision. The video matches the dark and aggressive mood of the song along with killer scene angles and editing, which give this video a unique and interesting vibe. In all, I am most proud of this video and how it all came together.”

The brand new episode of the Metal Blade podcast is up and features Chris Broderick. He talks about the album, and a myriad of other topics – listen now via SoundCloud or iTunes!

With a hefty resumé that chronicles time spent riffing and shredding in Jag Panzer, Nevermore, and a seven-year stint in Megadeth, Chris Broderick’s pedigree speaks for itself. Furthermore, joined by powerhouse drummer – and fellow Megadeth alumnus and former Eidolon drummer – Shawn Drover, bassist Matt Bachand (Shadows Fall) and vocalist Henry Derek (ex-Scar The Martyr), the band are a truly formidable metallic behemoth. Birth And The Burial is ten tracks of armor-plated, state of the art heaviness.