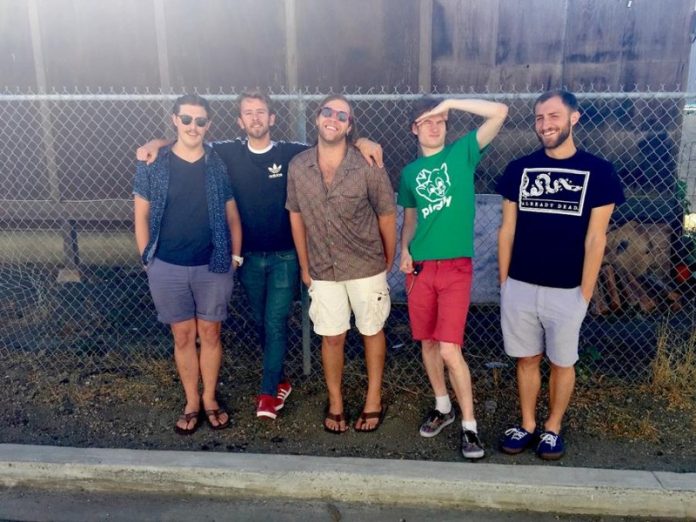 Sometimes the best results are born in the heat of the moment, and Telethon’s latest full-length effort ‘Citrosis’, rehearsed once the night before they took it to the studio, is proof. Formed in the winter of 2014 in Wisconsin, the power-pop meets punk-rock quintet have created a diverse record, which calls on Modern Baseball’s emotion and honesty, Thin Lizzy’s melodic guitar harmonies and Weezer’s playfulness.

Recorded in just over five days in September 2015 by Jack Shirley (Deafheaven, Punch, Funeral Diner, Big Kids, Joyce Manor, Laura Stevenson and more), ‘Citrosis’ is an adrenaline-fuelled relentless 32 minutes of near-gapless playback, blending an enticing mix of emotive lyrics, garage-rock-infused riffs and classic rock harmonies over the course of 12 tracks. ‘Citrosis’ is a loose narrative of the low-stakes anxiety that prods us throughout our waking lives, touching on topics usually only discovered post ‘coming of age’ along with the realisation that things are only as hard as you make them for yourself.

The lead track ‘Mineral King’ is a sun-kissed road-trip of angular rock n roll riffs and sugar coated piano and organ lines, infusing laid back yet self-realising lyrics that comment on everyday social constructs with contrasting moments of uplift. Tracks such as ‘Fallout’ and ‘A Funny Thing Happened To Me Today’ juxtapose incredibly honest lyrics and seemingly tongue-in-cheek sarcasm with upbeat instrumentation: 70’s era Hammond organ sections, punk-rock bass sections and conversely surf-rock driven guitars take the narrative out of its comfort zone and urges it to have fun. Telethon’s influences are greatly varied across the record, to the point that tracing the origin of the band’s overall sound is futile. What is clear is that this is the sound of a group of long-term friends writing honest songs about modern living and irreverently having a good time doing it.

On writing the new material Kevin Tully (Vocals/Guitar) said “These songs are the products of very caffeinated, isolated, stream-of-consciousness writing sessions. I recorded them as rough demos on my phone, then sent them out to the rest of the guys to fester and morph into what you hear on the record. Jack Shirley became the final puzzle piece by hearing out all of our scatterbrained big ideas and turning each of them into something grounded and tangible.”

‘Citrosis’ is an album that touches upon post-millennial topics explored with instrumentation from not only across the last three decades but over a huge range of styles and sub-genres. Despite being recorded with haste, the building blocks couldn’t have been more thoughtfully devised. This album, much like life, is a fast one-way play-through, tackling a whole range of emotions. If you want our advice, the best way to experience this is to turn it up as loud as it will go, embrace it and enjoy it.