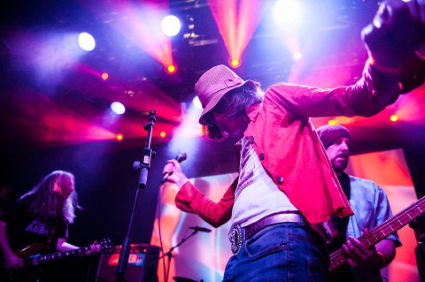 They’ve been called “the most unhinged band of all time.” Now they’ve got a live record out. Blimey.

Like Pink Floyd and Hawkwind before them, as chief exponents of unmerciful, head-frying psychedelia, deranged dub and electronica, over a career spanning five albums – Johnny Town-Mouse (1988), VCL(1989), Angels In Pigtails (1990), Pearlesque Kings Of The Jewmost(1992) andKing Of All The Spaceheads (1994) – they stand out as a remarkable anomaly.

In part influenced by the likes of Pussy Galore, Big Black and Butthole Surfers, they are an essential entry into the folklore of decidedly English eccentricity and experimentation with a legacy that has lived on over the years through a devoted coterie of fans, chaotic live shows and visionary records. Most notably, and indeed more recently this year, with the twenty-fifth anniversary of their seminal album Angels In Pigtails, released in 1990 on Kevin Martin’s (GOD/Ice/Techno Animal/The Bug) Pathological Records. An album that went some way to expunging the impure mash and disorder of previous releases to create a rich vista from otherworldly instruments, emerging sample technology and even greater psychosomatic depth. All to devastatingly brilliant effect.

Over the course of their trajectory the band adapted to several line-up changes before going on to release three more albums before disbanding in 1995. In 2013 however, they returned after a twenty-year hiatus with Russell Smith coming back into the fold, joined by guitarist Gordon Watson, original drummer John Jobbagy, Head of David’s Dave Cochrane on bass and new vocalist Neil Francis from Manchester’s equally exceptional Gnod. Retreating to the idyllic surroundings of Smith’s home in Bordeaux, the new five-piece line-up rehearsed for a number of outstanding shows in France and the UK, including Oxford’s Supernormal Festival and London’s Corsica Studios.

This August, with guitars placed firmly back at centre stage and a new lease of life running rife through their ranks Terminal Cheesecake release their first record in over twenty years. A live album (of all things!) that dusts off and reawakens the likes of ‘Johnny Town-Mouse’, ‘Bladdersac’ and ‘Herbal Spaceflight’ and puts forward new material as audible evidence of their peculiar, psychedelic and experimental potency.

“Personally, I have been a fan of the band since their first record on Pathological, and I connected with some fellows who were also deep into all things Terminal Cheesecake, so we traded live recordings,” explains Artificial Head Records’ Paul Chavez.

“There was something very dark and sinister about their sound. But also something maniacal and whimsical.  I couldn’t stop listening and ultimately found their first two releases a few months later. As time rolled on I connected with the band and kept bugging them about new or unreleased material. Finally, when I heard about the upcoming live release I kept prodding that it should be on my label… and here we are.”

Cheese Brain Fondue: Live In Marseille will be released on 11th August on the Houston, Texas-based label Artificial Head Records.