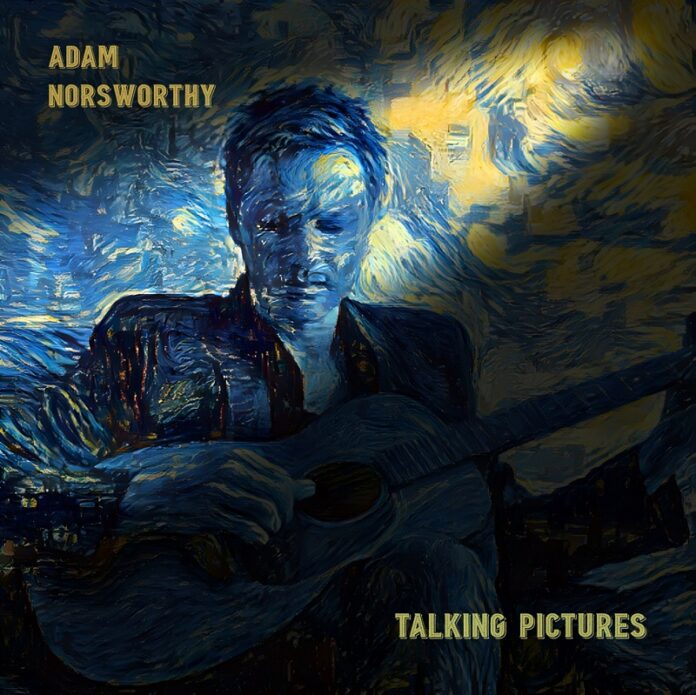 Talking Pictures is the new solo album from Adam Norsworthy, one of the most respected and critically acclaimed singer-songwriters on the UK’s live music scene. As a founder member of blues-rock band The Mustangs and rhythm & blues outfit The Milk Men, Adam has also forged a fascinating and widely-acclaimed solo career, having made four previous solo albums.

A collection of 11 new songs, all written by Adam, Talking Pictures showcases a softer, more reflective side of Adam’s writing whilst still maintaining his gift for writing memorable melodies and hooks, as well as his talent for writing lyrics that are often, in turn, honest & stark or vivid & memorable.

Released on Friday 27th January 2023, Talking Pictures will be released on Adam’s own Park Hall label.
It will be available on CD from www.adamnorsworthy.co.uk and digitally from Amazon, iTunes and all usual online retailers.

The first promo single to be lifted from the album is Talking To Myself, a mellow, “folk-soul” song with light, bright Summery hooks throughout.

“Talking To Myself is a different approach for me,” says Adam. “I wanted to showcase a different way of singing; much more laid back, much more expressive in many ways.  I wanted to keep the vibe very blue-eyed soul, but with the warmth of 70s music… hence ‘folk-soul'”

The track is underpinned with a classic groove by drummer Tim Weller, who has worked with a wide range of music legends from David Bowie to Eric Clapton. Tim is currently the drummer in The Divine Comedy.

Talking Pictures is self-produced by Adam and mixed & mastered by Wayne Proctor of House Of Tone.
The perfect partnership, this is the eighth album the pair have worked on together (three of Adam’s previous solo works, two Milk Men albums and two Mustangs albums). For the new album the pair have gone for a quieter, softer atmosphere, with many of the songs featuring just Adam on a single acoustic guitar. Indeed, Adam plays almost all the instruments on the album and as a result, Talking Pictures is Adam’s most intimate and personal statement yet,

“I grew up listening to folk music, and my mother was a folk singer so I wanted to draw upon more of my storytelling folk influences. My last album, Infinite Hotel, was a big statement album, and a big production, with many wonderful guest players joining me”, continues Adam.
“In many ways this is a reaction to that, a subdued and in places reflective work, with a bit of melancholy, but hopefully all in a memorable and enjoyable way!”

Adam’s previous album Infinite Hotel was released in March 2022; acclaimed critical review included Blues in Britain magazine calling it a “contender for Album of the Year.”

Infinite Hotel featured a host of stars from the UK’s live music scene including Oli Brown, Bennett Holland, Rich Young and Wayne Proctor. “It was an honour to have such great players join me”, reflects says Adam. “However I also love albums like Paul McCartney’s homegrown records, where he plays all the instruments.
I think that adds to the intimacy and DIY feel of a record, and I feel I’ve captured that with Talking Pictures.”

As one of the UK’s most prolific songwriters and musicians, Talking Pictures is Adam’s third album release in just over a year, following Infinite Hotel and The Milk Men’s fourth, and best-to-date album, Spin The Bottle.
The range of subject matter on Talking Pictures is both broad and fascinating, with songs about ageing, obsession, parenthood, invention and progress, as well as deeply moving pieces on Adam’s late parents, who sadly passed within four months of each other during the COVD crisis.