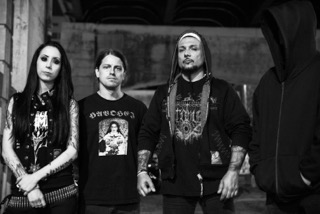 The new video from US occult noise/black metal artists T.O.M.B. is now available for viewing:

On this latest offering, lifted from the Fury Nocturnus album, the band comments:

“Awake….DARKNESS is a two song music video from our latest album Fury Nocturnus that was produced and directed by T.O.M.B. member Samantha Viola. The video reveals documentation from various field recording sessions for the album, as well as raw authentic footage from the project’s blasphemous audio history. The audience will find “no safety” within Awake..DARKNESS.  No computer graphics, green screens or fictional imagery was used to create this video. The result is a chaotic collage of ritual necromantic noise acts; cryptic desecration, sacrilege, and a close communion with the dead, conducted with the true intent and conviction of unholy black metal”.

Through 18 years of existence, T.O.M.B. (Total Occultic Mechanical Blasphemy) has created a multitude of horrific, spell-binding sound structures across 13 different releases including compilations, splits, EPs and LPs. During that time, the project has devoted itself to developing material with an essence directly derived from areas and elements associated with death, paranormal activity and occult practices.

Formed in 1998 and inspired by projects such as Abruptum, Havohej, Samael, Sunno))) and Wardruna, T.O.M.B. members No-One, B. Zimimay and Samantha Viola (the trio also notable as King Dude-signed act Dreadlords) orchestrated their latest recordings into 13 hypnotic and malicious tracks, resulting in a ritualistic album outside of the boundaries of contemporary ambient, doom, industrial, noise or traditional black metal music. When creating these field recording soundscapes, certain necromantic instrumentation was used: human and animal bone, cemetery crypt doors, tombstones and coffins, and audio EVP equipment.