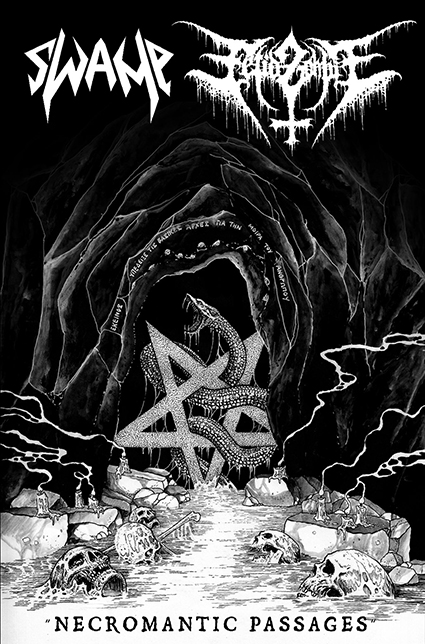 September 5, 2015
Reading time: 4 min.
Facebook
Twitter
Pinterest
WhatsApp
Linkedin
Email
Print
Telegram
Copy URL
By Andy Thorley
Greek thrashers and US Death metal bod team up – and its so old school its out on cassette
Greece’s Black Thrash band SWAMP and U.S. based Death Thrash band FETID ZOMBIE have teamed up alongside MORBID VISIONS MUSIC to release a new split cassette “Necromantic Passages” featuring new music from both bands. “Necromantic Passages”, set to be released in a limited edition this coming September 14th, will include three newly recorded tracks from each band along with artwork designed by long established artist Mark Riddick.
For the first half of the split SWAMP offers up two new barbaric hymns of raw and uncompromising Blackened Death / Thrash invoking the true spirit of underground Metal, as well as an excellent cover of TORMENTOR’s “Tormentor I”. The recording for these tracks took place at Vision of Sound Studio in Ioannina, Greece with help from Thomas Nastos during the mixing process.
FETID ZOMBIE pay homage to the early 90’s Greek Metal scene on the final few tracks of the split with three new atmospheric Death Metal hymns. Recordings and mixing for these tracks were completed at Dungeon 325 in Leesburg, Virginia (U.S.). Although a solo project at heart FETID ZOMBIE’s lone member Mark Riddick often enlists well known guest musicians, on this release guest appearances by members of Absu, Soulskinner and Where Evil Follows can be found. FETID ZOMBIE aim to achieve Death Metal in the most classic sense while bringing to the table traditional Heavy Metal elements showcasing Riddick’s broad appreciation for the music he has been dedicated to for the better part of the last twenty five years.
The “Necromantic Passages” Split CASSETTE will be available for purchase on the Riddick Art Big Cartel  webpage starting September 14th.