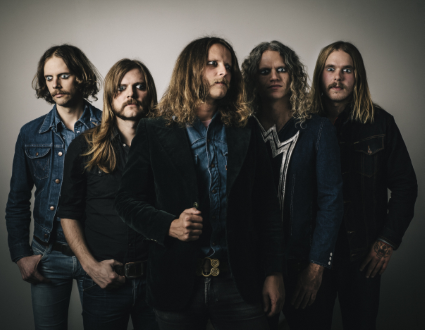 Awesome retro rockers are back back back!

Big of moustache and tight of trouser, Horistont drink from the bottomless wellspring of inspiration that’s been bubbling up through the layers of time since the birth of the blues – or Blue Oyster Cult at the very least. Theirs is a sound that harks back to the dawn of the 70s, when a new clutch of heads decided it was time to harsh the 60s hippies’ mellow and paint it black; those years when the twin spirit of hard rock and prog rose to redefine sound.

In their earlier years Horisont looked and sounded like the last guys standing at the world’s wildest and darkest party; these are the tight bro’s who laced the punch, torched the dance-floor and rode off into the night on their roaring hogs in a puff of green smoke. “Put the five soldiers of Horisont in a time machine 50 years ahead of time and we would still rock the silver socks of any future man, woman or robot,” frontman Axel once declared.

This quintet’s rock trip might be retro but their songwriting is timeless; a good melody lives forever and Horisont have songs in abundance. New album Odyssey is exactly as its title suggests: an epic journey into the known. A sonic trip. A mighty voyage of sound. You could even call their fourth full release a concept album – although they themselves prefer “space saga”. Either way it’s a brave band who open their album with a ten minute-long track, yet on the album’s title track Horisont dive straight into the deep end, delivering space-rock with all the dexterity and deftness of the very best prog rock’s finest, such as early Yes or Kansas.

“I think it was Tom, who during a tour, said that it would be fun to write a ten minute song,” says bassist Magnus Delborg.“When that song took shape the idea of a cohesive album was born. Most of the songs are in some way connected to the bigger theme, so – yes – it is a concept album. It concerns a supreme race of mysterious being who experiment with the creation of life and start to populate planets around the universe. And this is the story of one of those planets…”

Look out for more on the album next week