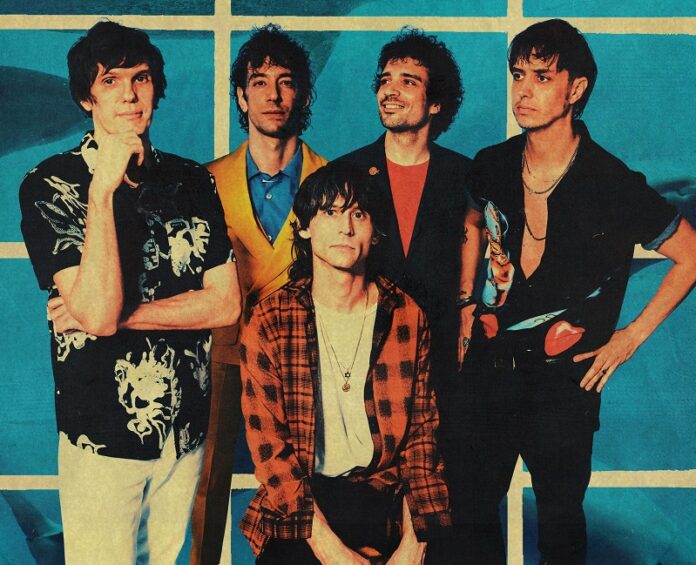 One of this century’s defining rock bands The Strokes will return to Victoria Park on Friday 25th August to headline Luno presents All Points East. It’s set to be a huge day of anthemic rock from New York and beyond – tickets go on general sale on Friday 27th January at 10am GMT via www.allpointseastfestival.com

Now with six UK top ten albums under their belt, the BRIT and GRAMMY Award winning outfit explosively landed on the scene in 2001 with their debut EP The Modern Age, going on to inspire a whole new generation of guitar-wielding indie rock bands. Over two decades later, they continue to lead the pack.

The band released their first studio album in seven years in 2020, The New Abnormal, winning the GRAMMY Award for ‘Best Rock Album’. After celebrating the 20th anniversary of their genre-defining debut album Is This It last year, The Strokes will return to London, where the band found success before hitting it big at home in the US.

The New York quintet first played All Points East in 2019, as they returned to the stage for their first UK performance in four years. Describing the performance, NME said the band were “on whip-smart form, rattling through their hits with zero fuss and – blimey – actually seeming to enjoy themselves…a masterclass in the effortless cool that made us love them in the first place.”

Joining The Strokes on Friday 25th August are none other than New York contemporaries Yeah Yeah Yeahs. Formed in 2000, the legendary trio emerged from the same bustling underground scene in New York that took the world by storm. The multi-GRAMMY-nominated band have four UK Top Ten Albums and returned with their fifth studio record,Cool It Down, last year – their first since 2013’s Mosquito.

Indie pop artist from Norway, Girl in Red, comes to All Points East for the first time. After winning three Norwegian GRAMMYs for her 2021 debut solo album If I Could Make It Go Quiet, she released single ‘October Passed Me By’ last year, produced by The National’s Aaron Dessner. Girl In Red will support Taylor Swift on tour in the US before performing in Victoria Park on Fri 25 Aug.

Australian punks Amyl and The Sniffers join the line-up this summer. Fronted by Amy Taylor, the ARIA award-winning band have earned a reputation for their raucous live performances and released their sophomore album Comfort to Mein 2021.

Angel Olsen will also be heading to Victoria Park this year. Having released her sixth studio album Big Time last June, the American singer-songwriter is set to make a spellbinding All Points East debut.

Next on the bill are Mercury Prize nominees black midi. Since forming in 2017, they have released three studio albums, each to critical acclaim. The London rockers’ latest, 2022’s Hellfire, broke into the UK Top 40 albums chart, and was also their first record to chart in the USA.

Each year, All Points East delivers an epic line up of world class headliners, exceptionally curated supporting line ups and big exclusives. This year is set to be no exception… Stormzy was announced as All Points East’s first headliner. In a UK exclusive show, Stormzy has teamed up with All Points East to headline and curate his own line-up for ‘This Is What We Mean Day’ on Friday 18th August.

Luno presents All Points East has become the essential London event since its inception four years ago. The quality of artists runs very deep across the days with established names and those on the cusp of stardom entertaining crowds. The 2022 event featured headliners: Gorillaz, APE Presents: Field Day, The Chemical Brothers and Kraftwerk, Tame Impala, The National, Disclosure and Nick Cave and The Bad Seeds.

2019 saw a flurry of awards for the new festival; Q Magazine awarded All Points East ‘Festival Of The Year’, and that same year All Points East won the award for ‘Best Festival’ at the Music Week Awards. The year before, 2018’s debut established this essential new event as one of the best festivals in the UK. Winning ‘Festival Of The Year’ at the Music Week Awards and ‘Line-Up of the Year’ at the UK Festival Awards, All Points East 2018 boasted headline sets from LCD Soundsystem, The xx, Björk, Catfish & The Bottlemen, The National and Nick Cave and the Bad Seeds.

A commitment to sustainability and accessibility goes hand in hand with the community elements and All Points East is proud to have been awarded Gold on Attitude is Everything’s Charter of Best Practice for our commitment to Deaf and disabled music fans.

All Points East continues to work each year with local charity the Tower Project to give volunteer opportunities to young people with learning disabilities and autism on site at the festival, as well as providing education and performance opportunities to the students of nearby ELAM arts and music school. Committing to 100% renewable energy, working towards eliminating single-use plastic from all serve-ware and programming upcycling workshops for children during In The Neighbourhood are further examples of the commitment to the local community and the park.

Local businesses are given opportunities to provide food, drink, merchandise and more so that the local community benefits as much as possible.

Previous article
BOUND TO BE DEAD
Next article
MAKE THE GRADE