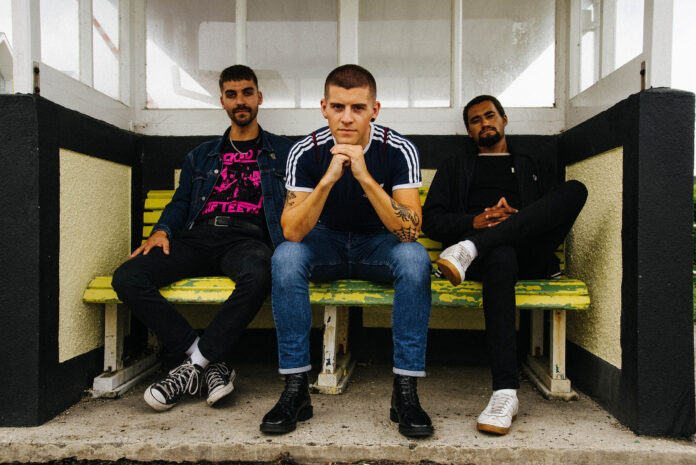 Famed for blistering live performances and exceptional musicianship, UK band Grade 2 bring no-frills classic punk to the modern era. Their self-titled album due on February 17th is a bone-crunching 35-minutes that agitates, intoxicates and liberates in equal measure.

Ahead of its release they share their new single Midnight Ferry, out today, featuring slick guitar riffs and lively shout-along verses that lead into crisp vocal harmonies.

“This song is our story, a tale of a night out and the truth of growing up in a rural town,” the band explains. “Capturing the adventurous spirit, trying to escape any mundane responsibilities, if just for a night. Just know you’ll be brought straight back down to earth on that journey home.”

50 years after the genre turned the music world upside-down, UK based Grade 2 are bringing the raw power of old school punk to a new generation. United by a love of old-school punk, ska and oi, childhood friends Sid Ryan (vocals, bass), Jacob Hull (drums) and Jack Chatfield (guitar, vocals) formed the band at fourteen years old, honing their craft playing Clash and Jam covers before refining their own sound. Melding the near-mythical musical heritage of their native Isle of Wight with the humdrum reality of growing up in a tired seaside town, Grade 2 spit out blistering punk music laced with passion, angst, humor and despair.

After signing to Hellcat Records in 2018 – helmed by Rancid’s Tim Armstrong – they put out their second album ‘Graveyard Island‘ in 2019. With the release of ‘Grade 2‘ comes their most representative work yet; a thumping fifteen track tour-de-force melding the uncompromising ethos of punk with the howl of contemporary injustice, personal identity, and frustrations of Gen-Z youth, authentically told by three lads with punk coursing through their veins.

Grade 2 will be touring extensively this Spring, starting with a UK & Ireland headlining tour in March, directly followed by headlining European Tour with Death by Stereo and a support tour with Rancid this summer. Please find the full list of dates below.