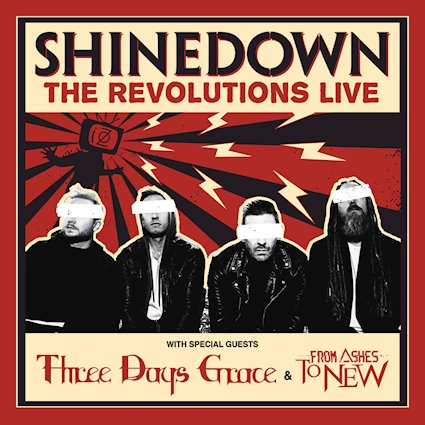 Hard rock group FROM ASHES TO NEW are excited to announce they will join multi-platinum rockers Shinedown and Three Days Grace on tour across the U.S. from April 3 to May 9. With four Top 10 singles, over 345 million streams and more than 55 million video views to date, the Lancaster, PA-based bandwill deliver their impressive blend of hard rock, hip-hop, electronic and alternative music at each date. The spring tour will see the band preview new music from their upcoming fourth studio album due this summer via Better Noise Music including its intimate debut single “Heartache” and the latest track “Until We Break” which features a guest appearance from Memphis Mayfire vocalist Matty Mullins. General admission and VIP public tickets will go on sale this Friday, January 27 at 10:00 AM (local time) at https://www.fromashestonew.com/tour.”The four of us in Shinedown are stoked to finally bring From Ashes To New on the road with us,” states Shinedown guitarist Zach Meyers. “Being friends with these guys for so long it’s always been discussed, and we’re glad we were finally able to make it happen. We look forward to their energy and their fan base at these shows.”

“In Q&A’s, our fans almost always ask us who we would be most excited to tour with,” shares FROM ASHES TO NEW frontman Danny Case. “Lately, that answer has been a resounding ‘Shinedown.’ In fact, it’s something our camp has been actively talking about for over a year. Shinedown has been, and continues to be, an awe-inspiring band of awesome dudes whose show we’ve always admired, and we’re extremely honored to be a part of this tour.”

FROM ASHES TO NEW extensively toured throughout 2022 including headlining jaunts featuring support from bands including The Word Alive, Fire From The Gods, Dragged Under, Blind Channel, Dropout Kings and Kingdom Collapse in addition to dates supporting Memphis Mayfire and festival appearances such as Blue Ridge Rock Fest. FROM ASHES TO NEW‘s music was featured on the official soundtrack for Better Noise Film‘s 2022 horror-thriller movie The Retaliators,in which the group also appeared on-screen. For the holidays, the band released a hard rock version of Mariah Carey‘s iconic “All I Want For Christmas Is You,” after going viral from releasing a teaser of their version on TikTok.

FROM ASHES TO NEW “UNTIL WE BREAK” Tour Dates

Previous article
MAKE THE GRADE
Next article
GUNNING FOR THE SPRING