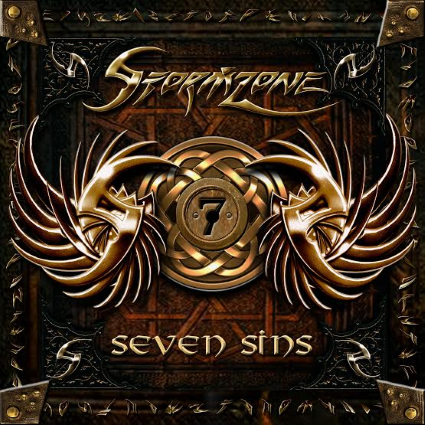 Stormzone wasn’t meant to be a working band at all. Basically, singer Harv wanted to mess about in the studio. Then he joined a Maiden tribute band for a bit of a giggle and realised what he’d got.

The word “Maiden” is appropriate here for two reasons. First, “Eddie and the boys” as Bruce might say, would appreciate the ambition here. And second, Stormzone have very much got the classic metal gallop about them.

And just for good Maiden measure, Not for nothing did the World’s greatest band choose Sweet Savage for a gig in 2010 in Dublin when Heaven And Hell had to tragically pull out. MV was there and good god, these boys went down a storm. The drummer in that band Davy Bates is here.

So credentials established, what is the fifth record from Stormzone like? The answer is pretty simple: pretty bloody good, frankly.

The band’s first concept album, set in the 18th century, the album tells the story of the mysterious Dr Dealer, his travelling troupe of various gifted misfits and the Seven Sins Emporium into which he invites men to test their resolve and strength.

All of which is no doubt very important to the creators of the work – and apparently Harv can talk for hours on the subject – but it’s less vital to the listener than the songs themselves, and these we can concern ourselves with – and for the most part they are excellent.

“Another Rainy Night” builds to a superb hook and casts glances to the likes of Saxon on the way. “Your Time Has Come” could be straight off one of those Mid-period Iron’s records like “Piece Of Mind,” while “The One That Got Away” is a full on stomper of a thing with obvious Dio comparisons probably welcomed.

The title track here is worthy of the name. A wonderfully grandiose piece of music, it builds most pleasingly, with just a hint of menace. It is arena rock in all but name, right down to its gallop. “Raise The Knife” almost matches it in every possible way, and has a fine fists in the air chorus to go with it.

A superbly well constructed record ends with a classy message of hope in the defiant “whoa whoa” chug of “Born Of The Damned” which gives “Seven Sins” the conclusion it richly deserves.

Dark subject matter abounds over classic metal riffs and if that sounds like your bag of studded denim jackets then Stormzone have constructed something you might just love.