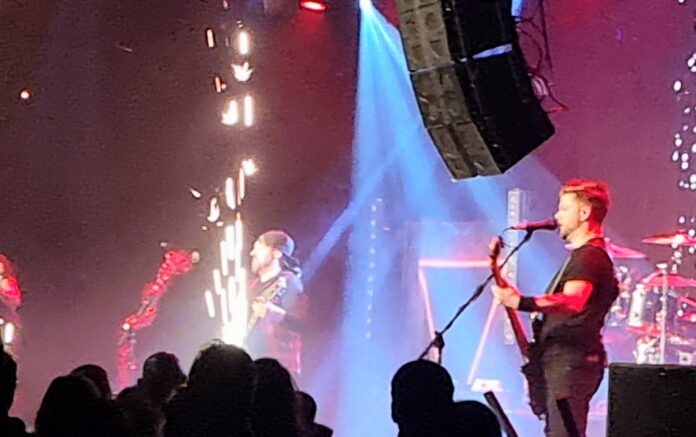 Back in the spring, Kira Mac and her band opened for Ricky Warwick. Except they didn’t, not really. Their drummer went down with Covid, and they played acoustic, telling some stories behind the songs and chucking in some covers. Here, restored to full power, we get the full Kira experience if you will. And what you see in the forty minutes they are on stage is enough to convince that those who are tipping them for big things might be right. “Back For More” drips with groove and soul (“it’s the Stones-y one” reckons Kira), and “Hellfire And Holy Water” – written about her dad  – is a mighty slice of southern rock. It’s not that there’s anything groundbreaking here, quite the opposite, both the title track from their just released record “Chaos Is Calling” and current single “Mississippi Swinging” are both hard rock and totally unashamed of their ambitions to do what the headliners tonight have done, indeed Kira says that a few years ago when Stone Broken played her hometown of Stoke On Trent, she’d asked them for a picture. There’s nothing in the set, as “One Way Ticket” (the one that opens the album) to suggest they won’t do it. Superb musicianship, Mac’s voice and their gift for writing a chorus that you won’t forget means its only looking up for a band to watch.

When, towards the end of their show (apt word, we’ll get to that) tonight Stone Broken play “Wait For You”, the house lights go up so the crowd can sing the chorus back to Rich Moss (who as ever is playing the first two thirds or so solo). MV looks around the crowd, in every pocket of the sizable audience there’s people hugging each other, there’s a couple of slow dances going on and there’s only one conclusion.

Stone Broken are everything they promised to be.

On the 18th December 2015, MV had found itself at The Slade Rooms, just up the road, watching a young band, about to put their debut album out, and you sensed then, this was a band who was going to make it big.

Everything that was great about Stone Broken, for it was they, then, is still great now. It’s just gone up a notch.

That includes the stage show. This is a full production, a proper rock gig. Pyro, flash bombs, you name it (handy really as it warms up the room!) but more than that (and this is not to imply any arrogance on their part) this is a band who knows its damn good.

Starting with “Revelation” – the title track of their 2022 album – and immediately going into old favourite “Stay All Night” – is sort of indicative of the set. An outfit that will never forget its roots, but proud of its future.

“Heartbeat Away” comes in with more bangs than Kiss (only a slight bit of poetic license), “Black Sunrise” sounds like all the US arena dwelling rockers, Alter Bridge would be proud of it, such is the class.

“Let Me See It All” gets bonus points as ever for using Warrant’s “Cherry Pie” at its start, and to their credit, they play some stuff they haven’t played before. The ballad “Make It Out Alive” sounds huge here and “Over The Line” likewise. The beauty of these was that they sounded like the most natural progression possible for the group.

Then there’s the crescendo that all arena gigs have (and yes, ok, this isn’t an arena, but the spectacle was there and the intent clear). More pyro for “Devil You Know”, more thick riffing in “Worth Fighting For” and the aforementioned huge ballad into the mix.

This being Christmas and all, there’s plenty of nods to the festivities. Santa appears chucking out gifts (and fair play to the band, there was a lot of them!) and there’s a spot of Wizzard as they do that tune, complete with a snow machine from the roof.

It’s not the last one, though. That honour goes to “Not Your Enemy” and it is – just like it was back in the day – utterly glorious.

Stone Broken don’t do encores (more bonus points!) but they don’t need to. As the confetti bombs go off at the end, it is job very much done.

It will not be a shock to anyone to learn that Stone Broken had been at the NEC last weekend to watch Alter Bridge, but as they finish here, you can’t help but think of that night’s main support, Halestorm. “This is my kingdom”, Lzzy Hale had sung. “This is my cathedral. This is my castle. And these are my people.”

In this corner of the Black Country, here tonight, they’d beg to differ. It belongs to Stone Broken and everyone knows it.