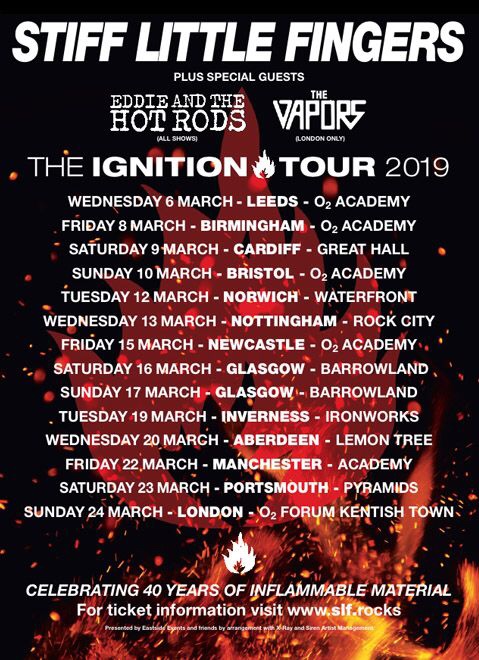 So after 43 years Eddie And The Hotrods are calling it a day. But there’s just a hint of a glint, you might say, in the eyes of singer and mainstay Barrie Masters when he says: “but I might be lying….” when he plays the song of the same name, that suggests you might not have seen the last of them. The Hot Rods rev up in the way they always do, with a brand of rock n roll that never really goes out of fashion. Maybe they are too old to sing a song called “Teenage Depression” but that doesn’t stop it being fun, and “Quit This Town” still feels full of frustration. “Hard Driving Man” is a palpable change of gear before they cheerily air the one you always knew they were gonna do, as it were. And if you’re desperate to break out of this city, and leave the people here behind, then it’s still the one for you. They don’t end with it, though, preferring instead to leave that “Gloria” and their take on the Them classic is as earthy as it gets. Something tells everyone here though, that this is merely a see ya later than a final curtain and we’ll still be ready for Eddie.

You want a lesson in how to stay relevant for 42 years? Try this: “We used to dedicate this to Louis Walsh and Simon Cowell. That seems old hat to me. But then, they are still a pair of gobshites!”

That, right there is how Jake Burns chooses to introduce “Guitar And Drum” here and don’t let anyone tell you that the power of both has diminished over the years.

What is equally telling about the band, though is that song came out this century. Inference, obviously being that these aren’t boys to rest on their laurels.

Whether it’s “Suspect Device”, “My Dark Places” (dedicated here to Keith Flint) or “Guilty As Sin”, which takes on the sex abuse scandal in the Catholic Church head on, SLF are a band that believes in not just the power of music, but the power of music to change things.

Sadly, as Burns points out before “Silver Lining” some of these words are as relevant today as they were back in 1981 when it was written, but that only adds to the vitriol.

Another key to this 80 minute masterclass though, is the pacing. “Harp” is acoustic based and folky, while the Ian Mcallum sung “Can’t Get Away With That” races for the finish.

After the classics “Nobody’s Hero” and “Gotta Getaway” end the set, they return for an encore that first celebrates International Women’s Day with “Drinking Again” a song from Burns’ solo album dedicated to his wife. Before “Tin Soldier” and “Alternative Ulster” conclude things in incendiary fashion.

In front of me, as the former is played, two fellas, early 50s maybe, put their arms around each other and pogo for all they worth. You imagine they’ve done it countless times before, and doubtless they’ll do it again.

That is a snapshot of why SLF keep doing this. Firstly, these songs have connected for generations, and secondly they are still bang at it. In fact, they are very possibly the very best at what they do. Dig the rigid digits.