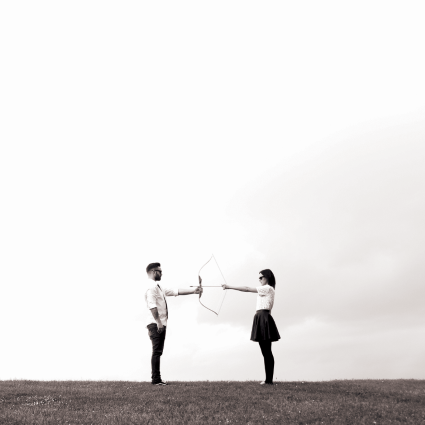 Sparked in 2013 from a chance encounter between mutual friends, St. Albans duo Tasha (Vocals and Piano) and Steve (Guitar) quickly formed “Two Beats Apart” and soon set about refining their sound and placing their own trademark style onto the folk rock genre. By pulling from an extensive arsenal from the song-writing aptitude of City and Colour and Radiohead, to the melodic mastery of Bon Iver, through to the vocal prowess of Adele, Two Beats Apart adeptly glide along the tight-rope of accessibility and singularity to create a sound with true longevity.

Having spent the past year working alongside such notable figures as Chrissie Hynde (The Pretenders), Reeves Gabrels (The Cure/David Bowie) and Billy Lunn (The Subways), both Tasha and Steve have fine-tuned not only their songwriting, but also their live performance. The duo are also starting to make an impact in their own right with national radio play, a BBC Introducing feature and printed praise from publications such as Kerrang! and Front Magazine, as well as being featured on Channel 4’s prime time show’ Hollyoaks’.

Two Beats Apart now strike out with the national release of their debut EP ‘Aim, Fire’. Harbouring a wealth of killer tunes, the EP impressively belies their youth. From the infectious and emotionally driven ‘Aim’ through to the melodic beatings of ‘Fire’, the two piece have crafted a record that will quench the thirst of fans needing something refreshing and inspiring.