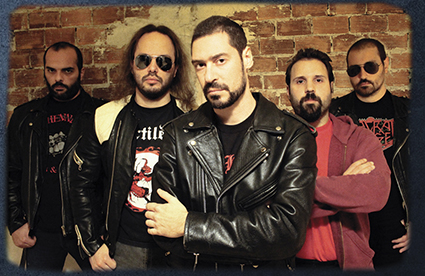 Formed in 2010, this Greek thrash crew have just released their debut record
NIGHTBREED was formed in December 2010 by drummer George Panoudis, guitarist Sofia Kataki and bassist Alexandros Gousios. Vocalist Dinos Zacharis and guitarist George Kyriazis completed the line up in Spring 2011.
NIGHTBREED played their first live gig in early 2012 and shortly thereafter Sofia left and was replaced by Stelios Makris on guitar. At the end of the same year they released their “From Yuggoth” demo.
Following some gigging during the summer of 2013 vocalist Dinos left and was replaced by Nir Beer. With that line up they recorded their debut full length released on Witches Brew in March 2015.