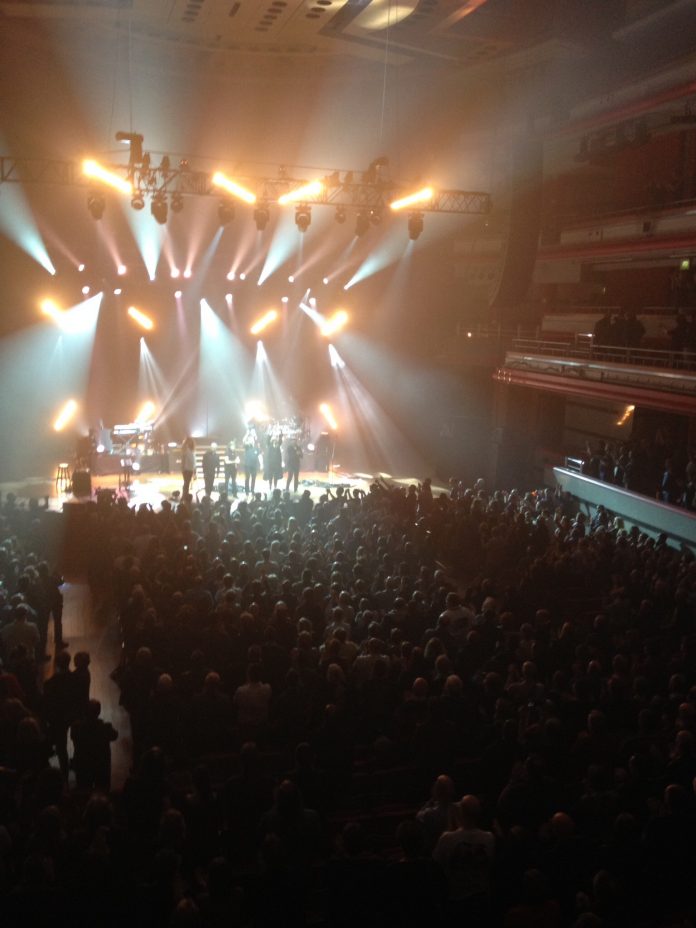 It’s 8-15 and time for Hackett. Did he sell Birmingham by the pound? Time for Steve to revisit revisiting Genesis as Andy gets his Prog on.

This epic show entered it’s third hour by singer Nads Sylvan donning a cape and miming writing with a quill as the most gloriously bonkers music is playing.

Just another night in the world of Steve Hackett, then.

Yep, in every sense of the phrase, Steve Hackett is back. So good is this tour that this is the third time he’s played this venue revisiting his Genesis material. Last year’s edition, it’s fair to say, was a copper bottomed, no messin’ triumph, as Hackett and his phenomenal band lovingly re-created some of the finest prog around. Actually, that’s unfair. This isn’t some covers outfit. This is a band that happens to play some Genesis material – material you won’t hear anywhere else played like this.

This time around the set is changed to include different tracks to keep it fresh, but that’s neither or there, in the great scheme of things, what is rather more important is that it’s taking place in this venue.

The Symphony Hall possesses some of the finest acoustics known to man and the intricacies of this music is really helped by the magnificent surroundings.

So it is that on “Squonk,” which is the second track of a mammoth affair that clocks in at just slightly over two and a half hours, drummer Gary O’Toole gets a drum sound so huge as to shake the foundations. That probably never happened when he was in Bucks Fizz (he gets bonus points from MVM for not only being Steve Hackett’s drummer, but also appearing with Kylie too……)

Musically this is brilliant, with barely a note out of place, while Hackett himself barely breaks sweat while giving what amounts to a prog rock masterclass. The band he surrounds himself with this year includes more with a dodgy 1980s pop past too – superb bass player Nick Beggs was a founder member of Kajagoogoo, while Sylvan provided vocals on the 1990s nonsense “Cotton Eye Joe” here, though, they display an incredible talent in terms of stamping a little of themselves on these tracks.

And what tracks they are. Let’s be blunt here, prog doesn’t get better than “Dancing With The Moonlit Knight” and “Fly On The Windshield,” both of which are tossed out with seemingly not a worry, pretty early in proceedings.

Perhaps this is because Hackett knows what’s to come. “I Know What It’s Like (In Your Wardrobe)” is barmy and brilliant, ” The Musical Box” is incredible and “Supper’s Ready” (which includes the whole cape and quill thing) is remarkable in scope.

There is still time for “Watcher Of The Skies” (which was the opening track last year – replaced by “Dance On The Volcano” for 2014’s jaunt) and a veritable freak-out of “Los Endos” to finish things off.

Hackett is an engaging host, with Sylvan acting as the hip shaking, robot dancing, extrovert sidekick. The guitarist isn’t verbose, but what he says is by turns funny and pertinent, including this: “it’s all Genesis, tonight.” He explains, before pausing….”early Genesis, though.” Which is why this concert is as a big a triumph as last years was. Someone has to keep this brilliant music alive, and it might as well be Steve Hackett. Yet again he sold out Symphony Hall and yet again this will be one of the show’s of the year.