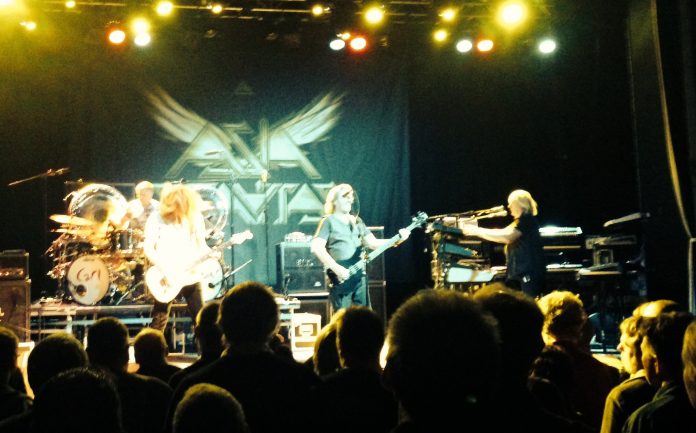 Messrs Palmer, Downes, Wetton & Coulson hit the stage bang on 8pm on Saturday, when you are Asia you don’t need to be sitting backstage waiting for the support to finish when you could be out there yourselves. A half full Wulfrun Hall greeted the the band with enough noise that you actually believed the place was packed to the rafters.

‘Sole Survivor’ & ‘Wildest Dreams’ were the opening tracks of a very enjoyable 100 mins by the band who were out promoting their latest album ‘Gravitas,’ the show was a good mix of old & new tunes which complimented each other beautifully,throw in a few solo slots and what you had was a throughly enjoyable evening.

New member of the band Sam Coulson who wasn’t even born when Asia released their debut album in 1982 added some youthful exuberance…..in fact I’m not sure he didn’t stop smiling once during the show, his guitar work was wonderfully received by the audience so much so that you actually forgot that he had been drafted in as replacement for the legend that is Steve Howe, moreover he looked that comfortable with the rest of the band.

The band returned following Mr Palmer’s percussion masterclass to end the show with ‘Only Time Will Tell’, ‘Open Your Eyes’ & ‘Heat Of The Moment.’ All in all a fabulous evening, a shame that the venue was only half full but you wouldn’t have known with the rapturous applause that followed each song and the well deserved ovation that ushered the band off stage, it was my third time of seeing Asia in concert. Roll on number four!!!