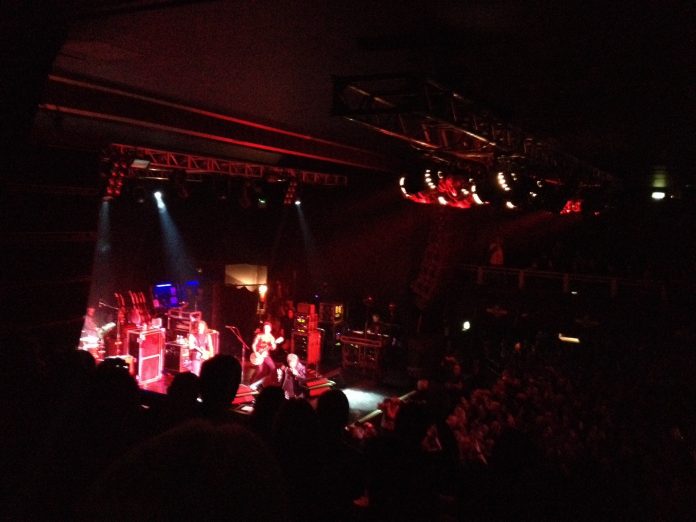 Billy Idol returns to UK shores for the first time in ages. Was it a good day to start again?

The Dough Rollers are releasing their new record on Jack White’s Third Man Records label. It’s not too big a stretch to see why. The New York quartet plough a similarly authentic retro furrow as Mr. White, while there is a kind of Kings Of Leon sound to Jack Byrne’s vocals, and the bass rumbles pretty menacingly throughout. The Dough Rollers benefit when they add a touch more melody to their plug in, play loud philosophy, but there is enough here to entice people to check out their “Gone Baby Gone” opus when it surfaces next week. There is, however, a suspicion that the club shows that they are playing around these Billy Idol shows might be the real place to check them out, but for now The Dough Rollers have quite a tasty recipe.

If like your humble scribe you were five when the 70s became the 80’s then the name Billy Idol was part of your growing up. That snarl, the lip curl and those videos that never seemed to be off MTV, all made the man born William Broad a serious deal.

Time has been kinder to him than MVM it seems, because as the set begins with “Postcards From The Past” all you ever thought about Billy as a striding, leather clad rock god is all present and correct.

This, the first night of his UK tour, is sold-out, which is testament to his enduring legacy, but moreover, it is a trek that proves Idol is still an important current artist. New album “Kings And Queens Of The Underground,” is receiving rapturous reviews – as well as bothering the charts, particularly in the US – and a track from it “Can’t Bring Me Down” is aired pretty early in the set, it is trashy, catchy rock n roll. Suffice to say it fits in well. “Save Me Now” by contrast, from the just released collection, sounds like it was written with radio in mind, it is, for our money, just a little too safe and restrained.

Idol is not afraid to delve further back into his past during the course of this entertaining near two hour set, as backed by Steve Stevens and Billy Morrison on guitar, he is into Generation X’s “Dancing With Myself” which sounds fresher than it has a right to.

There is a lengthy balladic interlude halfway through, as “Sweet Sixteen” jostles for our heartstrings along with the touching title track from the new record. An autobiographical tale, it gives things a quasi prog feel, before “Eyes Without A Face” ends the romantic portion of the evening.

Billy, though, is at his best when he pouts and the music struts, so his loose approximation of “LA Woman” by the Doors works, as does “Whiskey And Pills” and the set ends with “Rebel Yell” which is suitably incendiary for bonfire night, and sees Idol stripped to the waist and looking far fitter than a man approaching 60 has any business doing, never mind one who has lived quite such a life.

The encore of “White Wedding” (which Idol introduces by saying: “Hey Steve, show them what a hit song sounds like, would you?”) is – after an initial acoustic run through – like a portal back to those Saturday morning’s watching The Chart Show on tv, it is a brilliant song and everyone in here knows it, while “Mony, Mony” is obscenely catchy.

Billy Idol is like all artists of his generation (x). He is desperate to still make a mark in the download age and attract new fans, but is almost hamstrung by the fact his core audience wants him to be like they remember. The fine line between pure nostalgia and something more artistically rewarding is a difficult conundrum to solve, tonight he did it just about right.