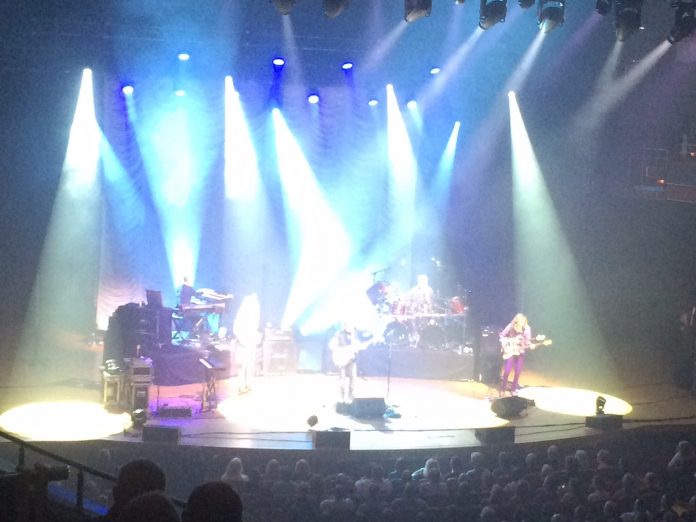 Legendary prog rocker makes his annual stop off in Birmingham.

These Autumn tours that Steve Hackett goes on have, in recent years, been a staple of the Prog year. The Genesis Revisited shows that have lit up this room, have done more to reinvigorate the work of that bands early period than anyone else ever has, and have been phenomenal.

This one is a little bit different. This one is half and half. The first half is Steve Hackett solo material (subtext here is this is Hackett’s way of saying: “I’ve released a magnificent solo album this year and I’m going to play some of the damn thing”) and half Genesis. It’s also a mammoth affair, clocking in at nearly three hours before its done.

But as everyone who goes to a long gig knows, a mark of how good it is is how quickly it flies by. By that measure this one is a blur.

Simply put this is stunning from start to finish. Brilliantly conceived, you’d imagine this was planned to the nth degree in rehearsal, but most importantly magnificently executed by the band, most of whom have been with Hackett for years. The exception to this is Roine Stolt – prog rock royalty in his own right, the Flower Kings’ man is newly on board this time and makes his presence felt.

What we learn from the first half is two-fold. First Hackett has some superb solo songs to call upon. His “Voyage Of The Acolyte” album is forty years old this year, but the songs he plays from it here – including a stunning “Shadow of the Hierophant” which ends the solo set – are fresh as can be, and all concerned clearly enjoy playing them. But second, it’s clear that the brand new “Wolflight” record is as good as you thought it was. Listen to “Love Song To A Vampire” and decide it’s not from one of the albums of the year.

There’s a fabulously laid back feel to things throughout. Hackett’s brother John turns up for an acoustic version of “Jacuzzi” and Steve merrily sits down strumming on his chair as if he doesn’t have a care in the world. Given the level of musicianship – and the calibre of players in his band – it is not surprising that he’s happy to step out of the limelight on occasion, and that he does so is of huge benefit to the show.

The relaxed feel permeates the second set too. Here Nad Sylvan, who had appeared just once in the first set, is the main singer, as he was on the all Genesis gigs, and he excels again.

Some of these tracks are different to the material that Hackett had performed before, and one of these new ones “Cinema Show” (“I had shelved this before because there’s not enough guitar,” he jokes) is a real highlight. The same is true of “After The Ordeal” which sees Stolt take lead duties to great effect.

There’s plenty of room for classics too, and no one can argue that “The Lamb Lies Down On Broadway” isn’t one of those. A brilliant “The Musical Box” concludes things with Roger King on keyboards really picking out the nuances. And there’s an encore which sums things up nicely – one of theirs, one of mine, if you like. The solo one, “Clocks – The Angel of Mons” is dexterous and a sonic journey, with “Firth Of Forth” still a stone cold classic.

Steve Hackett is still the modest and unassuming master of prog rock. The tour might be called From Acolyte to Wolflight but it doesn’t really matter. It’s all the same. It’s all brilliant.