Just like last time they came to these parts The Masterson’s are performing support duties – and playing in The Dukes later on. Chris Masterson and Eleanor Whitmore are a fine opening act too. Newer material like the title track of last year’s album “Transient Lullaby” with stomping stuff like the more primal “Fight” and if “Don’t Tell Me To Smile” remains arguably their highlight – and their most acerbic song too, woe betide the woman who the song is aimed at! – then an example of their musical chemistry comes on the gorgeous “Birds Fly South” the eponymous cut from their debut collection. Whitmore’s glorious voice shows perhaps just why they’ve been so acclaimed over the years, and “Sorry You’re Sick” rounds off one of the more pleasantly charming half hour opening sets that you will find.

“My therapist says that I keep trying to find relationships with women that aren’t suitable for me because I really want to be alone.” So says Steve Earle in his lengthy monologue before “The Girl On The Mountain” – the last song tonight. “But I am an old romantic, so I believe it can happen…”

He has, to be fair, had plenty of practice over the years. Married seven times – including twice to the same woman – and with addiction problems that have been well-documented (although he has been clean for 23 years) Steve Earle is the living embodiment of  – as one of his own songs and the title of his biography put it: “A Hardcore Troubadour.” 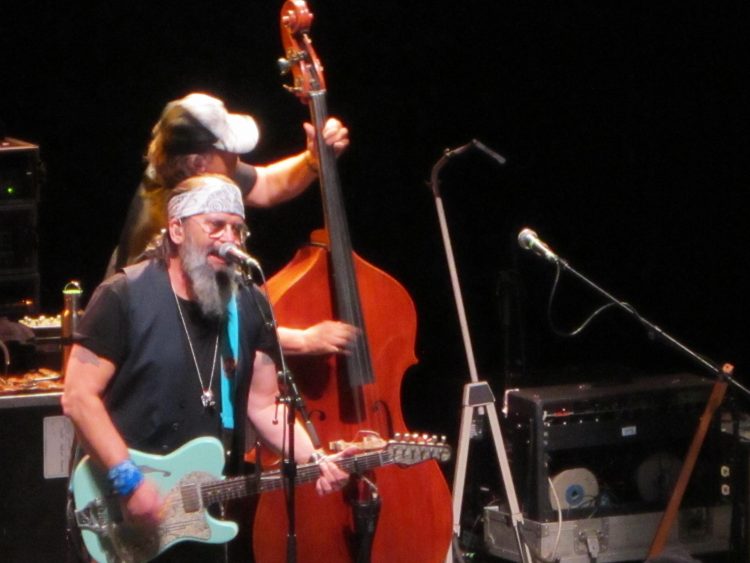 I read an interview with him in The Guardian last year, around the time that his latest album “So You Wanna Be An Outlaw” came out. It said that he looked like an aging Hell’s Angel, and, tonight, as he walks out with his bandana on, and that now trademark beard, it is hard not to think of him as a cast member of “Sons Of Anarchy.”

Indeed, the early part of the set is made up of material from that new record. More country  – and certainly less politically motivated – than much of his other work, the title track and “Looking For A Woman” shuffle and “Firebreak Line” dedicated to the firemen who tragically lost their lives today in the California Wildfire’s (“they were protecting some rich asshole who never shoulda put a house there in the first place”, spits the singer) is a highlight.

A two-hour show rightly affords him the chance to do the new stuff, but everyone here is experienced enough to know there’s got to be classics too. And the middle part is peppered with them. “My Old Friend The Blues” and “Guitar Town” are still brilliant (and given a freshen up here), “Johnny Come Lately” likewise and let’s be honest, “Galway Girl” and “Copperhead Road” have long been mainstream.

In between all this there’s a smattering that show the depth to Earle’s work. “Jerusalem” is gospel infused, Taneytown” is the perfect example of his darkness at its best, “The Week Of Living Dangerously” is probably more from personal experience than some of the others, and “Fixin’ To Die” is nothing more than a very heavy blues rock song, and Chris Masterson is a fine lead man.

Some of these favourites, might in truth, been better left to the end. Concluding the main set with “Hey Joe” is fair enough – especially as he uses it to condemn Trump – but the encore loses, for my tastes anyway, a little momentum.

That’s not to say that any of the three, “Dixieland”, “Ben McCulloch” or the aforementioned “…Mountain” are bad songs, they aren’t, but where you’d want a tumultuous end perhaps, you don’t really get one.

Not that Steve Earle does –  or should, even – care what I think: “I’ve come to the conclusion that people’s opinions of me are none of my goddamn business” he offers during his monologue and that’s fair enough. He’s earned the right to do whatever he likes. He’s not the last of the troubadours, there’ll always be more lonely souls who are searching this road, but he was the first one to open my mind to how different country could be. And Steve Earle And The Dukes is still doing it his way 30 odd years later.