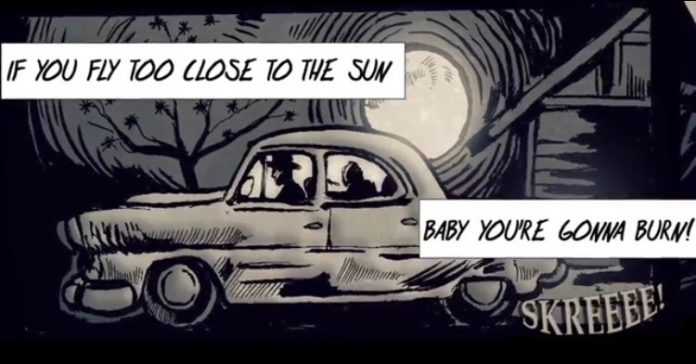 Walking Papers unveil striking new animated video, This Is How It Ends :

This Is How It Ends, also serves as the title of a comic book of the same name, created by Walking Papers’ Jeff Angell, graphic novelist Matt Hayward and artist Csaba Master. The clip features a collage of panels from the aforementioned graphic novel, giving a true visual representation of the music.

Walking Papers play 7 UK shows in September, for what promises to be one of the essential tours of 2018. Starting in Nottingham at The Bodega on Wednesday 12th September, the UK tour culminates with a show at The Borderline in London on Friday 18th.

“When writing a song, I try to capture a moment. When performing live, I let the moment capture me.” Says Jeff Angell of Walking Papers. “The energy and enthusiasm of the fans in Europe and the UK make that easy to do. Many of the songs on WP2 were written while touring there and I’m excited to bring them back to people and places that inspired them.”

Walking Papers upped the sonic ante with their aptly dubbed second album WP2, released earlier this year from Loud & Proud Records. Once again deploying the in-sync production handiwork of mixmasters Jack Endino (Soundgarden, Nirvana, Mudhoney) and Martin Feveyear (Mark Lanegan, Kings of Leon, Queens of the Stone Age), and Justin Smith (War Paint, Eagles of Death Metal, The Ravonettes, Queens of the Stone Age) WP2 builds on the promising template of the band’s self-titled 2013 debut, which Classic Rock Magazine called “a masterpiece of mood and tension,” and Rolling Stone Magazine echoed “dark, alternately sensual and sinister.” WP2 brings the band into their wholly ascendant second phase with aurally galvanizing statements like the savage, swaggering backbeat of “Death on the Lips,” the anthemic buildup of “Red & White,” and the delicate yet forceful declarative shuffle of “Don’t Owe Me Nothin’.”

Walking Papers elevates Angell’s signature character studies in songs like the explosive “Somebody Else” where he croons: “Outside the city’s waiting / for a chance to prove me wrong / She’s trying to talk me into doing something stupid and doesn’t seem to take her very long.” “I live vicariously through the characters in our songs.” Angell explains “It’s healthier for both society and myself that way.”

“A song can say in three verses what takes a novel 300 pages to say by what it leaves to the listener’s imagination,” Angell concludes, With WP2, Walking Papers have inked an indelible sonic contract that guarantees your ears will gladly come back for more.